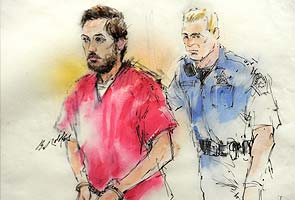 Denver: A Colorado judge on Thursday ordered accused movie theater gunman James Holmes to stand trial on charges he killed 12 people and wounded dozens more in a shooting rampage at a midnight screening of a "Batman" movie last summer.

Arapahoe County District Judge William Sylvester ruled that prosecutors had shown probable cause during a three-day preliminary hearing this week that Holmes committed the crimes, and ordered him bound for trial on all counts. He said Holmes, 25, should continue to be held without bail.

The former neuroscience doctoral student is charged with 24 counts of first-degree murder and 140 counts of attempted murder stemming from the July 20 rampage at the opening of "The Dark Knight Rises" in the Denver suburb of Aurora.

In addition to the 12 people who died, 58 others were wounded by gunfire and a dozen more suffered other injuries. Holmes faces two counts of the same offense for each victim - one for commission of the crime "after deliberation" and another for "malice manifesting extreme indifference to human life."

Promoted
Listen to the latest songs, only on JioSaavn.com
He also was charged with one count each of felony possession of an explosive and use of firearms in a crime of violence.

Prosecutors have yet to decide whether the seek the death penalty. Legal experts have said they expect Holmes' lawyers to mount an insanity defence, but his legal team said they would not be ready to enter a plea at the next court hearing in the case, set for Friday.
© Thomson Reuters 2013