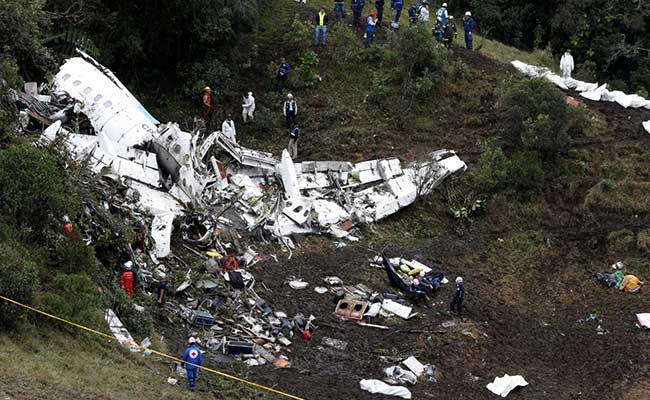 The pilot of Colombian plane asked for permission to land it before it slammed into a hillside. (Reuters)

Medellin, Colombia: Air crash investigators in Colombia sought Wednesday to piece together the terrifying final moments aboard a charter jet that crashed while carrying a Brazilian soccer team to the biggest match in its history.

The probe into Monday's crash pressed ahead on multiple fronts - with accounts provided by some of the six survivors - even as soccer clubs and leaders around the world joined Brazil to mourn a tragedy that claimed the lives of scores of people, including players, coaches and journalists.

Fans of Medellin's Atletico Nacional gathered on Wednesday evening at Atanasio Girardot stadium, where the team had been set to face off against Brazil's Chapecoense squad in the South American Cup, to pay homage to their lost rivals.

Nearly 50,000 people, many dressed in white or wearing T-shirts featuring both teams' logos, joined in chants for the Brazilian team and held flowers. Thousands more, who couldn't enter, watched on large screens on the street outside. Some scaled the stadium walls to gain entry.

"It's very sad for soccer, for their families, for all of us - we're brothers in this sport," said Elder Ortega, 52, sitting on the upper level of the stadium above a banner reading "Soccer has no borders."

Brazilian Foreign Minister Jose Serra struggled to hold back tears as he thanked Colombia and Atletico Nacional fans for their support.

Among the questions likely to occupy the early stages of the probe: whether a possible electrical malfunction set in motion the events that brought down the plane - a variant of the British Aerospace 146 - with the Chapecoense team aboard.

Also under scrutiny were the crucial minutes between a first emergency call to air traffic controllers in Medellin declaring a "total electric failure" and a second SOS from the cockpit that said - according to media reports - that the plane's fuel tanks had run dry.

The pilot repeatedly asked for permission to land the plane before it slammed into a hillside, according to a recording leaked to several Colombian media outlets and reported by the Associated Press. The Washington Post could not immediately verify the authenticity of the report.

Civil aviation officials initially said 81 passengers and crew members were aboard, but Colombian officials later revised the number to 77. The reason for the change was not immediately clear.

Theories raised by analysts suggested that the pilot may have intentionally dumped fuel in hopes of reducing risks of a fireball in the crash or that the aircraft's tank had run dry as it moved into the upper limits of its range.

A surviving crew member, flight attendant Ximena Suárez, told Colombian officials that the inside of the plane went dark before its deadly plunge, media reports said.

A statement by Jose María Córdova International Airport in Medellin said the pilot reported an electrical fault moments before the crash. But investigators, including a team of British aviation experts, hope that flight recorders will shed more details on the cascade of events about 50 miles from Medellin's airport.

Data from Flightradar24 showed the aircraft flying in a circular pattern before it crashed. The U.S. National Transportation Safety Board also offered assistance to Colombian investigators.

The plane departed from Santa Cruz, Bolivia, where the team had traveled on a commercial flight from Brazil. The trip to Medellin would be near the top of the 1,600-nautical-mile range of the aircraft, an Avro RJ85, according to figures from Britain's civil aviation agency.

On Wednesday, investigators and recovery teams returned to the wreckage as soldiers guarded the site. In Medellin, meanwhile, medical teams moved ahead with identifying the remains and treating the survivors: three players, two crew members and a journalist.

"Many passengers got up from their seats and started yelling. I put the bag between my legs and went into the fetal position as recommended," he told Colombia's Radio Caracol.

Christian Kruger, head of Colombia's customs agency, said that 45 bodies have been identified and that investigators expected to finish the work later Wednesday.

In Brazil, three days of mourning were declared. Chapecoense - which was in Brazil's lowly fourth division just seven years ago - was on its way to play in the finals of the Copa Sudamericana, one of the continent's most prestigious tournaments.

In London, the arch of Wembley Stadium was lit up in Chapecoense's color green. At the Vatican, Pope Francis noted the "Brazilian people's sorrow" while greeting Portuguese-speaking pilgrims at his weekly public audience.