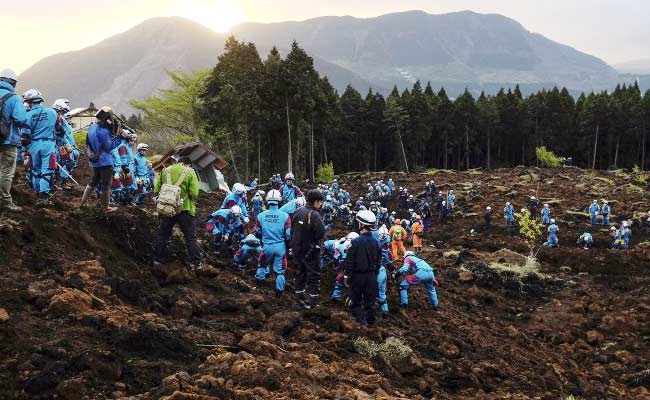 Policemen search for survivors at a landslide site after earthquakes in Minami-Aso, Kumamoto prefecture. (AFP Photo)

Minamiaso: In this mountainous Japanese town known for its hot springs, prized beef and Jersey milk cows, more than 2,000 people have taken refuge from earthquakes at school gymnasiums and community centers, surviving on rock-hard biscuits, cold rice balls and bread.

There is no running water to bathe or flush toilets. Many elderly evacuees rest on futon mattresses they brought from home.

The bedding covers the floor, and there is no privacy.

"Now I realize I haven't taken a bath since we came here," said Yachiyo Fuchigami, a 64-year-old woman in a hilltop gymnasium in the town of Minamiaso on the southern island of Kyushu.

She is among some 100,000 people who left their homes after two shuddering earthquakes on successive nights last week - late Thursday and early Saturday - knocked over hundreds of buildings and killed at least 45 people.

Even many whose houses are still standing are afraid to sleep inside because of aftershocks. Many are sleeping in buildings converted into temporary shelters or in their cars.

With water service cut off in many places and roads heavily damaged or blocked by landslides, authorities are struggling to cope with the stream of people seeking shelter.

The situation is particularly acute in Minamiaso, a town of 12,000 and hot spring resorts in small clusters of buildings scattered on mountainsides. The shortage of food, water and other necessities shows how easily remote Japanese villages can be cut off.

The second, magnitude 7.3 earthquake knocked down a bridge that links the town to the outside world, so that getting there now requires a long drive around Mt. Aso, a 1,592-meter (5,223-foot) volcano.

Nearly 500 staying at the hilltop gymnasium initially received only a sweet bean dessert called "yokan," a couple of rice balls and water. Then rolls of bread and instant cup noodles were added. Volunteers cooked and delivered miso (soybean paste) soup.

Sunday brought bananas, as well as additional portable toilets and diapers supplied by the university.

At another shelter in Minamiaso, the food ration was rock-hard biscuits called "kanpan," which means dried bread and rice balls and rolls, which came with cold tea or water.

"Unfortunately those kanpan aren't my favorite, they are not good for your teeth," said 60-year-old Takayuki Aramaki. "I miss hot food."

He was delighted to see US Marines flights bringing supplies, which included ready-to-eat food and emergency supplies, via tilt-rotor aircraft called MV-22 Ospreys, which landed at a park on the edge of town.

Workers, meanwhile, tried to fix cracks in the road to improve access to the town, but a magnitude 5.8 aftershock Monday night triggered new landslides and left already-tilting electric poles even more tilted.

In the nearby city of Aso, the aftershock forced the reclosing of a main road just opened after a repair.

"That means we are not going to get food supply to this area," Munetaka Ikeda, a hotel owner, said Tuesday morning. "The road conditions and access virtually change by the minute."

Ikeda sleeps in the reception hall so he can spring up to escort his guests to a parking lot after strong aftershocks.

There were screams at the gymnasium when Monday night's quake struck, and everyone went outside, said 30-year-old evacuee Masashi Otsuka.

The gymnasium evacuees were moving to another shelter Tuesday, a nearby elementary school, because some were worried that the gym stands on a hill.

Ninomiya Minoru, an 80-year-old retired tofu maker who has been sleeping in his car, said he might move to the new shelter because it's closer to his home than the gym was.

The two-story apartment building he used to rent to students collapsed, with its first floor rooms crushed to the ground. His house and former tofu shop still stand, but look shaky.

"These buildings have to be demolished," he said, pointing at all of them.