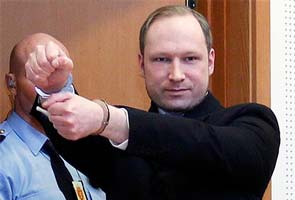 Oslo: Norwegian mass killer Anders Behring Breivik's complaints about prison life range from daily body searches to the temperature of his coffee, according to extracts from a 27-page letter published on Friday after his lawyer protested that his human rights are being violated.

"I highly doubt that there are worse detention facilities in Norway," the right-wing extremist, who killed 77 people in a bombing and shooting frenzy in July last year, wrote in the letter to Norway's correctional services, according to tabloid Verdens Gang (VG).

One of Breivik's lawyers had revealed on Thursday that his client believed his prison conditions "breached human rights", but survivors scoffed at his gripes.

Breivik earned international notoriety last year when he detonated a bomb outside the centre-left government's headquarters on July 22 and then went on the rampage at a Labour Party youth camp on the island of Utoeya, killing 77 people many of them teenagers.

The far-right extremist was sentenced in August to 21 years in jail for "acts of terror" over the worst peacetime atrocity in Norway, and is now being held in near complete isolation at a high security prison outside Oslo.

In excerpts from the letter quoted by VG, the 33-year-old outlined a catalogue of complaints that ranged from everyday annoyances to more serious issues.

Breivik said he was not getting enough butter to spread on his bread, was having to drink his coffee cold and was not able to keep a moisturiser in his cell, which, to his dismay, is sparsely decorated and has no view.

He also said that the handcuffs he has to wear when being transferred are razor sharp and "cut into his wrists".

Other complaints concerned the daily searches of his cell and body searches, for which he had to get undressed, and restrictions placed on his correspondence.

Tord Jordet, one of his lawyers, confirmed the letter's authenticity to AFP. Norway's justice ministry declined to comment.

"He is aware that, taken separately, his grievances can seem unimportant, but taken together, they paint a grim picture," Jordet said on Friday.

"His freedom of speech is being violated. Being deprived of this freedom of expression breaches the constitution and human rights."

Breivik should also have access to an exercise room and a computer room. However, access to those facilities is controlled by the prison authorities who, according to Jordet, haven't replied to his requests in recent weeks to use the computer.

Wanting to correspond with his supporters and to write books, Breivik only has use of a pen, which he considers very inconvenient, Jordet said.

Breivik, who has been separated from other inmates since his arrest, also claims he is deprived of recreational and social activities.

But Eivind Rindal, a survivor of the Utoeya rampage, said he was unmoved by Breivik's "crocodile tears".
Comments
Norwegian mass killer