Co-Working on Vacation: A Desk in Paradise 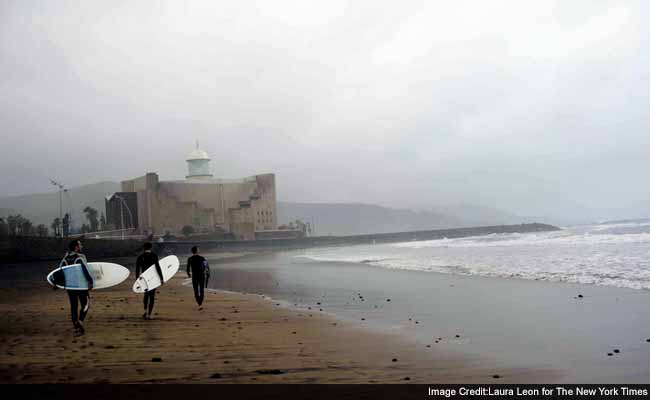 Guests of the Surf Office, a co-working facility in the Las Palmas de Canaria, in the Canary Islands, take a break from their workday. (Laura Leon, The New York Times)

Hotels and resorts have long catered to travelers who cannot disengage from their jobs. But increasingly there is a new option for those who need to work but who also want the benefits of a vacation.

These new centers are an offshoot of co-working spaces, which offer the benefits of an office environment on a temporary basis. But they also provide a place to sleep, have fun and mingle with colleagues - not in humdrum office parks but in exotic locations around the world, in the European countryside close to urban centers or in warm-weather destinations like Bali.

Call it the busman's holiday for the digital age.

Matej Hrescak, a product designer at Facebook, spent several weeks at the Surf Office on Gran Canaria in the Canary Islands, near one of the island's noted surfing beaches.

"I really appreciate long uninterrupted periods of work time in order to dive deep into a particular problem, and having a destination where you're far away from usual distractions made this possible," he said.

The high-speed Internet, fully stocked office, access to a kitchen and camaraderie of other guests at barbecues, biking trips and other planned group activities, he added, all contributed to his productivity.

"You'll get your work done, you'll surf and you'll meet like-minded people," said Hrescak, who is originally from Slovakia and now lives in Palo Alto, California. "I don't think I'd be able to have such an experience while staying at a resort."

Raphael Harmel, a co-founder of Speecheo, a web app meant to improve speeches, left his native France 10 months ago to travel the world and is now in Uruguay. He says he prefers to stay at co-working spaces whenever possible because they are all-inclusive and "are trying to reinvent the way people work."

"Normally when you arrive to a new location, you have to find a place to live and a place to work," he said, adding, "For digital nomads and entrepreneurs like me, it is definitely the best existing option."

Liz Elam, founder of Link Coworking in Austin, Texas, and executive producer of the Global Coworking Unconference Conference, a network of co-working conferences, emphasized the focus on social interaction.

"At hotels, travelers shut the door and order room service," Elam said. "At co-working-co-living spaces, they are part of a community of shared ideas."

Steve King, a partner at Emergent Research, an independent research and consulting firm in California, said the trend to blend co-working with living started about five years ago. He cited as factors advances in technology that allow people to work from anywhere there is fast Internet, the round-the-clock work mentality and the move toward more people traveling and rejecting the traditional work schedule.

But people are social, King said, so they seek out spaces where they can work with others.

"I would be surprised if there were more than 20 to 30 co-working-co-living spaces around the word," he said. "But I think there's going to be very rapid growth."

Elam attributes the growth to more independence and flexibility in reaction to a lack of job security and the tendency among many Americans to work too hard and take too little vacation.

Companies, too, are drawn to the intimate communal areas, amenities and activities of co-working and co-living spaces. Nine remote-working employees of Automattic, a web development corporation, gathered for a work meetup this month at the Surf Office in Gran Canaria, taking over the 10-room property for six days "to build relationships, have real-time interaction and also work on projects that are best done in person," the company said.

The idyllic locations are no accident.

"If you can work from anywhere, why not outside the city with some fresh air to breathe, good food to eat and nice people to talk with around the fireplace?" said Eric van den Broek, who opened Mutinerie Village last summer, an hour and a half southwest of Paris in an old restored farmhouse that belonged to his grandfather.

Since then, it has hosted many corporate retreats and team-building events.

"Without being stressed and tempted in big cities," said William van den Broek, Eric's brother and a co-founder, it is easier to disconnect and "focus on creative or introspective work."

Julianne Becker helped found Coconat, a "workation retreat" set to open in July about an hour from the center of Berlin. The cluster of bungalows and gardens is built around a castlelike water tower from the late 1800s, and its name is a portmanteau of "community and concentration in nature." There, Becker said, "people can work for a few hours, take a long walk, then be super refreshed and ready to go again."

A growing number of co-working spaces are temporary, like Coworking Camp, a pop-up venture established at a beachside hotel for six weeks in November and December in Kemer, Turkey.

Matthias Zeitler, founder of a software company, says he got the idea for it as a member of a small co-working space in Salzburg who yearned for a larger community.

"Co-working is really best if you have a lot of different people, with diverse skills; it drives the creative spirit," he said.

Promoted
Listen to the latest songs, only on JioSaavn.com
At Coworking Camp, there was a core group of some 30 entrepreneurs, start-up founders, coders, designers, marketers, developers and other creative types from 18 countries.

"It was a very open atmosphere," he said. "We shared what we really felt. Then everyone gave feedback. It was very powerful. We really focused on work, networking - and vacation."
© 2015, The New York Times News Service
Comments
Vacationco-workingexotic locations vacationSurf Officesurfing beachesworkation retreat