Far from providing clarity, the 15-second video released Wednesday by Charles Harder, an attorney for Trump, only led to conflicting interpretations. 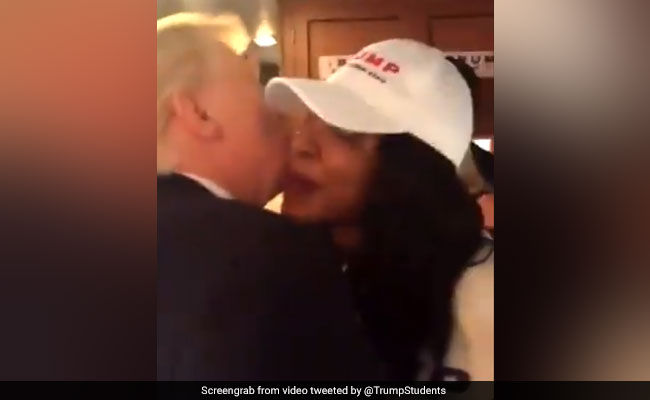 The 15-second clip shows trump grabbing a woman's hand and kissing her.

Attorneys for Donald Trump say the video of the president embracing then-campaign staffer Alva Johnson in 2016 refutes her allegations that Trump forcibly kissed her without consent. Johnson's attorneys say if nothing else, the footage proves her claims were truthful.

Far from providing clarity, the 15-second video released Wednesday by Charles Harder, an attorney for Trump, only led to conflicting interpretations.

In a February lawsuit and interview with The Washington Post, Johnson alleged the president grabbed her hand and leaned in for a kiss before a Florida rally on Aug. 24, 2016. She turned her head, which caused Trump to kiss the side of her mouth, she alleged, leaving her humiliated.

Here's the video of President Trump "forcibly" kissing Alva Johnson on the mouthpic.twitter.com/9j0SPdOuYu

In a Wednesday court filing, Harder brushed off Johnson's battery claim as "unmeritorious and frivolous." The video, he argued, shows an "innocent interaction that is mutual - and not forcible."

Hassan Zavareei, a lawyer for Johnson, said in a statement the video "corroborates exactly what Alva said."

"Now, whether or not everybody would have felt violated by that is an open question. But Alva was. And she testified exactly why she felt uncomfortable. She testified that she didn't really know how to react when it happened and that she was confused and uncomfortable," he wrote Thursday. "After Access Hollywood came out, Ms Johnson was able to put in context exactly what Trump had done to her and what it meant. Indeed he told her himself, in his own words, exactly what that kiss was."

Speaking with The Post earlier this year, Johnson said she did not fully process the gravity of the encounter until about six weeks after the alleged kiss, on Oct. 7, 2016, when The Post published the "Access Hollywood" tape of Trump bragging about kissing, groping and forcing himself on women.

"You know I'm automatically attracted to beautiful - I just start kissing them," Trump said in 2005. "It's like a magnet. Just kiss. I don't even wait. And when you're a star, they let you do it. You can do anything."

"I felt sick to my stomach," Johnson said, adding she quit the campaign about three weeks before the election. "That was what he did to me."

Zavareei alleged Trump and his associates, namely Sanders, were dishonest in their claims that the incident never happened. In a separate Wednesday filing after the video was released, Johnson's attorneys alleged Trump's legal team had removed the video's metadata, preventing Johnson from knowing "who created the video, when it was created, and other important information about its origins."

Harder did not return an email requesting comment Thursday.

In previous interview with The Washington Post, two Trump supporters that Johnson identified as witnesses - a campaign official and Pam Bondi, then the Florida attorney general - denied seeing the alleged kiss. In the brief video, which was reportedly taken by campaign volunteer Brian Hayes, Trump is seen placing both of his arms on Johnson's shoulders and appears to plant a kiss near her right cheek, though it's not completely clear if he makes contact with her mouth.

In the court filings, Harder indicates that after the interaction Johnson told Trump, "We're going to get you in the White House and I'll see you in February" - though it's not completely clear in the video who made the remark.

Johnson is one of 16 women to accuse the president of sexual misconduct. Many of the accusations came following the release of the Access Hollywood tape. The most recent allegation came from New York-based writer E. Jean Carroll, who said Trump sexually assaulted her in a department store dressing room in late 1995 or early 1996.

In response, Trump said Carroll was "totally lying" and "not my type."