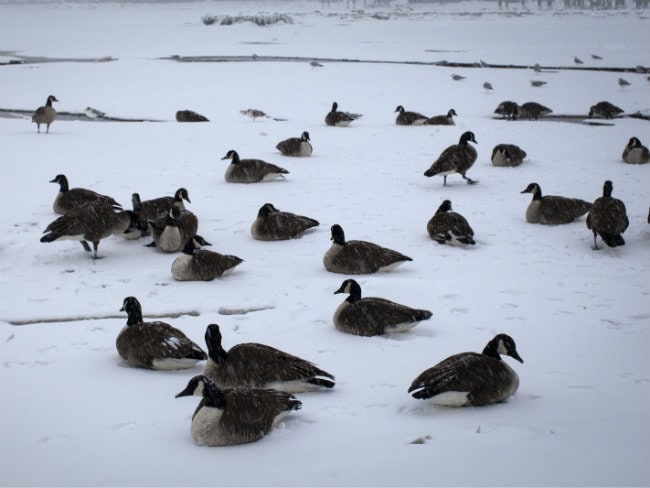 Krynica Morska, Poland: It takes the dexterity of a lacemaker to remove the tiny bird caught in nets strung between pine trees on Poland's Baltic coast, a veritable paradise for dozens of migratory species.

Polish ornithologist Jaroslaw Nowakowski delicately unravels the Goldcrest, among Europe's smallest bird species, placing it inside a muslin bag before moving it to a make-shift laboratory in a tent for measuring and tagging with rings.

The hulking professor says studies by the University of Gdansk over the last 55 years show a disturbing trend in the wings of certain species.

"Thanks to our extensive records, we have solid proof of the change and have raised the alarm, but generally to no avail.

Migratory birds face a myriad of other man-made threats. Hundreds of thousands, if not millions, end up on dinner plates around the Mediterranean basin.

Snipes, with their long, slender bill, are considered a delicacy from Cyprus to France, even though they provide precious little meat.

"Sometimes our bird rings return to us, as it's a rule to return them to the country of origin. I'm sure more than one Frenchman has cracked a tooth eating pate made using our birds," he told AFP.

He explains that rings often return with documents marked "pate" as the location they were found.

The colourful Goldcrest that Nowakowski has just removed from the net is tiny, yet mighty. Weighing in at just 4.5 grams (0.16 ounces), it can easily fly cross the Baltic.

"It can weigh up to six grammes, but then we'd say it's a bit obese," he chuckles.

After weighing it and measuring its wings and tail, Nowakowski fastens a numbered ring around one of its legs that will help track its winter migration south or west.

Fifteen volunteers including pensioners, engineers and bank employees, help Nowakowski and fellow ornithologist Michal Redlisiak check 50 nets for new birds around the clock. Any delay in removing them could prove fatal.

Volunteers on the night shift wear head-lamps as they wander the forests like ghosts checking the nets for freshly snared birds.

"Some days our nets catch just 30 birds, while on others there are 1,000 to 2,000. We don't really sleep much. Without the volunteers, our research would be impossible," says Nowakowski.

Ornithologists have been studying birds annually on Poland's Vistula Spit using the same methods and measurements for the last 55 years, creating an unparallelled treasure trove of data.

"This is how we managed to create the world's largest and most comprehensive continuous data base of measurements," he told AFP.

At 96 kilometres (60 miles) long and two kilometres wide, the spit located on Poland's Baltic sea coast just east of Gdansk is considered one of the world's most important habitats for migratory birds, alongside Gibraltar and the Bosphorus strait.

Nowakowski explains the area is a crossroads for three migratory routes."

Flocks from Scandinavia rest there en route to the Balkans and Africa via the Middle East.

Others from northern Russia, Finland and the Baltic states pass through while flying to France, Spain and West Africa.