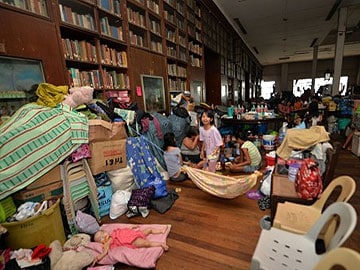 This photo taken on December 25, 2013 shows survivors of super Typhoon Haiyan at the People's Center and Library, which is serving as a temporary shelter in Tacloban, Leyte province

Tacloban: Schools reopened on Monday in badly damaged central Philippine towns for the first time since one of the world's strongest storms ever to hit land killed thousands two months ago.

Crowding into makeshift classrooms built from tarpaulins and plywood, the children - many of them still traumatised - sat quietly as teachers tried to engage them in friendly banter.

Mothers refused to leave the tents despite appeals from teachers to let the children slowly resume their daily routine, an AFP reporter said.

"Only about 50 per cent of our school's nearly 1,000 pupils are back," lamented principal Maria Evelyn Encina in the seaside village of San Roque near the central city of Tacloban, where giant tsunami-like waves triggered by Super Typhoon Haiyan wiped out entire neighbourhoods.

She said at least nine students had been among the dead, although the fate of many others and their families remained unknown.

"They could be in evacuation centres or taken in by their relatives in the mass evacuation that followed," Encina said. "But we can't know for sure. We just want to let them know wherever they are that we are here waiting for them."

What passes for a community learning centre now are desks under a white tent donated by relief organisations.

It sits about 50 metres from the sea, in an area that the government has officially dubbed a "permanent danger zone", the principal said.

"We need a more permanent structure in the longer term, but in the meantime this will suffice," Encina said.

Haiyan cut a swathe of destruction when it struck on November 8, bringing powerful winds that topped 315 kilometres (197 miles) an hour. It also triggered giant storm surges which swamped large areas, leaving nearly 8,000 dead or missing and nearly 30,000 others injured.

It also displaced four million people, 1.7 million of them children, according to the United Nations Children's Fund (UNICEF).

The agency along with other groups is leading a campaign to help some 550,000 children, teachers and day care workers return to schools.

"UNICEF's objective is to ensure that children affected by typhoon Yolanda (Haiyan's local name) return to quality learning as soon as possible," said the group's officer in charge in the Philippines, Angela Kearney.

By re-establishing a daily routine, UNICEF says it hopes to transform schools into "safe spaces" that provide some sense of normalcy.

It said that with children back in school, parents would also have more time to rebuild their ruined homes.

But with memories of the surging, towering waves still fresh, mother of six Milet Labrado, 42, was not taking any chances.

"The school is just too near the sea, and we survived by clinging to each other," she said, while anxiously watching her youngest, a six-year-old boy, mingle with his classmates.

Promoted
Listen to the latest songs, only on JioSaavn.com
"I still see my neighbours being taken away by the waves in my dreams every day," Labrado said.

"I am not yet prepared to leave my boy and entrust him to anyone."