In a series of tweets, the singer called out the British press for its treatment of the royal couple. 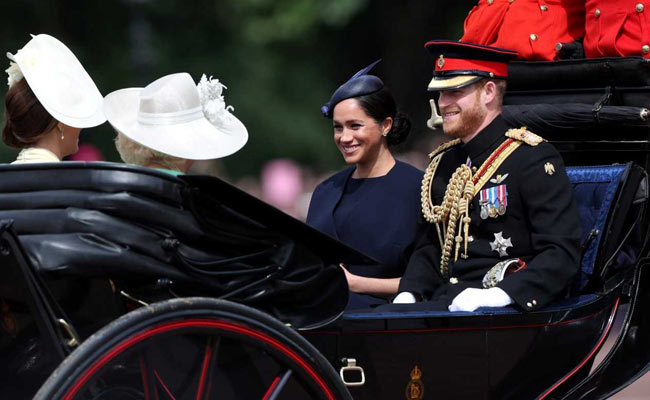 Meghan, the Duchess of Sussex, and Prince Harry ride in a carriage in London on June 20

The notoriously intrusive British press won't leave the Duke and Duchess of Sussex alone and Sir Elton John has had enough.

In a series of tweets posted on Monday, the superstar singer, a longtime friend of Diana, Princess of Wales, sprang to the defense of Meghan and Harry, writing that he was "deeply distressed" by "distorted and malicious" media coverage of the royal couple's recent trip with baby Archie to Nice in France.

He wrote that he felt it was his duty to "protect" the young family from the media given his closeness with Diana and accused the press of contributing to her "untimely death."

"Prince Harry's Mother, Diana Princess Of Wales was one of my dearest friends. I feel a profound sense of obligation to protect Harry and his family from the unnecessary press intrusion that contributed to Diana's untimely death," he tweeted.

Diana was killed in Paris during a high-speed car chase in 1997. At the time, seven photographers were charged with manslaughter - although the charges were eventually dropped. Elton John performed the song "Candle In The Wind" at her funeral.

The young couple's recent travels and modes of transportation have been heavily scrutinized in the press. In recent days, blurred images snapped of the family disembarking a private aircraft were widely circulated online as Britain's Sun newspaper ran a story with the headline: "DUMBO JET: Eco-warriors' Meghan Markle and Prince Harry fly on private jet again to France after gas-guzzling Ibiza trip."

"Meghan Markle cradles three-month-old Archie as she and Prince Harry land in south of France after their THIRD private jet jaunt of the summer" wrote the Daily Mail, adding that the couple's trip "made an estimated seven times more emissions per person than commercial jet."

In his flurry of tweets, Elton defended the couple's use of a private aircraft, saying that he was the one who paid for the jet.

"After a hectic year continuing their hard work and dedication to charity, David and I wanted the young family to have a private holiday inside the safety and tranquility of our home. To maintain a high level of much-needed protection, we provided them with a private jet flight."

The singer also addressed reports that the couple's lavish lifestyle was further damaging the environment: "To support Prince Harry's commitment to the environment, we ensured their flight was carbon neutral, by making the appropriate contribution to Carbon Footprint," he added.

Wrapping up his defiant attack on the press, the star called on the tabloids to "cease these relentless and untrue assassinations on their character."

For Britain's tabloid press, stories about Meghan have been particularly brutal in recent years - so much so that in 2016, Prince Harry issued an unusually fierce statement in which he condemned the racist and sexist media coverage of his then-girlfriend and expressed concern for her safety.

Last month, Meghan guest-edited British Vogue. But, despite her efforts to be positive and profile women who are "forces for change," the media and online trolls once again pounced on an opportunity to critique her. Some demanded to know why she hadn't included the queen as one of the women she admires, while the Sun pondered how the Duchess had found time to guest-edit the magazine but was seemingly too busy to meet with President Donald Trump during his state visit to Britain.