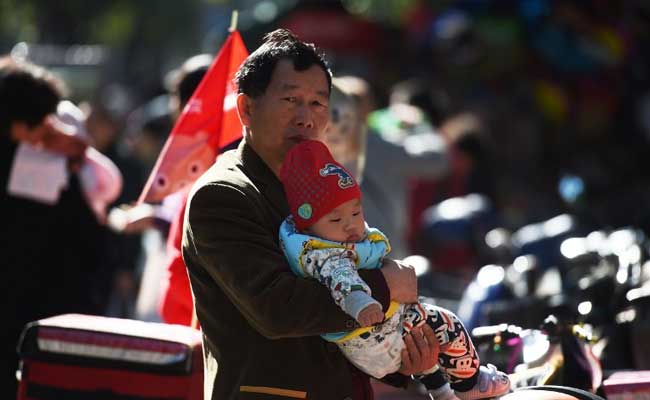 With the government's announcement in October that it would allow all married couples to have two children. (File Photo)

BEIJING: Wan Changru's 6-year-old daughter collects passes - for her dance school, English lessons and other extra-curricular classes, anything bearing her name that she can pretend is an identity card.

The girl is legally unregistered because her parents broke China's one-child policy in having her. They say they cannot afford to pay a 200,000 yuan ($30,000) fine that would allow her to gain legal status. Without it, she can't visit a hospital or get on a plane to go on holiday to Disneyland like her friends.

With the government's announcement in October that it would allow all married couples to have two children, Wan and her husband have decided to take family planning officials to court to try to get her registered without paying the fine.

Wan's daughter is one of nearly 14 million unregistered people across China, most a legacy of China's 35-year strict family planning policy that limited most urban couples to one child, though rural couples were allowed to have two if their first was a girl.

Those who are unregistered lack a "hukou" (pronounced HOO-koh) - a household registration entry in a small family book and on a police computer system. Without a hukou, a person has limited access to health care, education and other benefits, and cannot get a permanent ID card.

"Now that the country has relaxed the one-child policy, I think it's time for us to call upon the public to realize that there are still a large number of marginalized people in China who have no hukou," said Wan, a 42-year-old housewife.

The Ministry of Public Security said last month every citizen has the right to a hukou and efforts should be made to register those without one. It gave no details on how, and no official has so far publicly backed any amnesty for fines, which vary from city to city.

The hukou system predates the one-child policy, which perpetuates inequalities not only between registered and unregistered Chinese, but between urban and rural residents.

"The one-child is just a policy that can be quite easily changed, like China has just done, while the hukou is a much larger institution," said Kam Wing Chan, a geography professor at the University of Washington who researches the hukou system. "It has been around for almost 60 years now. It has all kinds of impact. It's dividing China socially, economically."

China's ruling Communist Party initiated the household registration system in the 1950s to control the movement of people. It ties them to their family's hometown and the subsidized health and education services available in that area. Changing one's hukou can be difficult, particularly shifting residence to big cities like Beijing and Shanghai where many migrants want to work.

The system has barely changed even as millions of people have moved from the countryside to cities. Big-city governments have balked at the costs of delivering education and health care to migrant workers and their children, an estimated 253 million people - almost a fifth of China's population.

China last year announced a cautious reform of the hukou system by allowing urban areas to give migrants a residence permit with some social benefits, or a local hukou if they meet a city's own residency requirements. Shanghai and Shenzhen are experimenting with registering migrants based on a points system related to educational background and their employment history in the city, for example. The government's plan aims to enable around 100 million people to settle in towns and cities by 2020.

None of those changes, however, are aimed at helping the unregistered.

To create more public awareness of their cause to have their second children registered, Wan and seven other mask-wearing parents cycled through Beijing on a recent smoggy Saturday with signs stuck to the backs of their shirts pleading for unregistered children to be given "an identity."

"We organized the cycling event because we don't want our children to be forgotten," Wan said.

Their route took them past Tiananmen Square, a sensitive location near the government's offices where police told them to take their signs off. Instead, they cycled in a different direction and then went home.

In the 2010 census, there were 13.76 million people, or 1 percent of the population, without permanent residence registration. Data collectors visited homes and counted people regardless of their registration status.

In Beijing, some districts allow unregistered children to go to school if their parents have a Beijing hukou and can prove the children are theirs. That's how Wan's daughter is able to attend school.

"The real trouble comes when my daughter gets ill," said Wan. "Almost all hospitals in China require an ID card to register medical treatment, so when she's ill, I can only take her to the small community clinics near our home."

The penalty in Beijing for having a second child is a "social compensation fee" that is three to 10 times the average annual disposable income for a household with two children - which was 44,000 yuan ($7,000) last year. Families with higher-than-average incomes were charged even more.

Wan said her court case has been accepted by the court and she is waiting to be notified of the hearing.

"I simply cannot afford to pay such a large sum of money," Wan said of her 200,000 yuan fine. She did not want her daughter's name published, partly because the girl doesn't want her friends to know she doesn't have a hukou.

"She seldom talks about this with me and her dad, but it does slip out at times and she says she wants to fly to Disneyland in Hong Kong or Japan, probably after hearing about the travels of her friends at school," said Wan. "But without a hukou, my daughter can't get an air ticket."

Another parent taking family planning officials to court is Yan Fengyin, whose 5-year-old son is being treated as a third child because she and her husband had one child each in previous marriages. Those two children are not in their custody, so they argue that the family planning commission in Beijing's Fangshan district should not treat the 5-year-old as their third child, and are asking a Beijing court to revoke the 400,000 yuan ($60,000) fine.

Beijing lawyer Yan Xin says he has worked on six cases in the past two years related to families going to court after breaking the one-child policy.

"The success rate of such lawsuits is very low, and I can merely help to negotiate between authorities and the families who usually demand that the punishment is revoked and want to get a hukou without paying the fine," he said.

It's unclear whether the process will become easier with the end of the one-child policy, since that change occurred so recently.