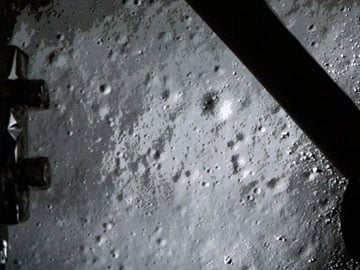 This photograph taken off the screen at the Beijing Space Centre shows the moon surface transmitted to earth by Chang'e-3 carrying China's first lunar rover prior to landing on the moon on December 14, 2013

Beijing: China's lunar probe Chang'e-3, with the country's first moon rover on board, successfully landed on the earth's satellite on Saturday, marking the first time that China has sent a spacecraft to soft land on the surface of an extra-terrestrial body.

The lunar probe began to carry out soft-landing on the moon at about 9 p.m. on Saturday and touched down on Sinus Iridum, or the Bay of Rainbows, about 12 minutes later, according to Beijing Aerospace Control Centre, reported Xinhua.

During the process, the probe decelerated from 15 km above the moon, stayed hovering at 100 metres from the lunar surface to use sensors to assess the landing area to avoid obstacles and locate the final landing spot, and descended slowly on to the surface.

The success made China the third country, after the US and the Soviet Union, to soft-land on the moon.

Compared to the two countries, which have successfully conducted 13 soft-landings on the moon, China's soft-landing mission designed the suspension and obstacle-avoiding phases to survey the landing area much more precisely through fitted detectors, scientists said.

The probe's soft-landing, which has been termed the "black 12 minutes", is the most difficult task during the mission, said Wu Weiren, the lunar programme's chief designer.

The soft-landing was carried out 12 days after the probe blasted off on an enhanced Long March-3B carrier rocket.

Chang'e-3 is part of the second phase of China's lunar programme, which includes orbiting, landing and returning to the earth. It follows the success of the Chang'e-1 and Chang'e-2 missions in 2007 and 2010.

A renewed moon fever has sprung up in recent years following the lunar probe climax in the 1960s and 1970s.

The Chang'e-3's is the world's first soft-landing of a probe on the moon in nearly four decades. The last such soft-landing was carried out by the Soviet Union in 1976.

"Compared to the last century's space race between the US and the former Soviet Union, mankind's current return to the moon is more based on curiosity and exploration of the unknown universe," Sun Huixian, deputy engineer-in-chief in charge of the second phase of China's lunar programme, said.

"China's lunar programme is an important component of mankind's activities to explore peaceful use of space," Sun added.

For an ancient civilisation like China, landing on the moon embodies another meaning. The moon, a main source of inspiration, is one of the most important themes in Chinese literature and ancient Chinese myths, including that about Chang'e, a lady who took her pet Yutu (Jade Rabbit) to fly toward the moon, where she became a goddess.

Promoted
Listen to the latest songs, only on JioSaavn.com
"Though people have discovered that the moon is bleached and desolate, it doesn't change its splendid role in Chinese traditional culture," said Zhang Yiwu, a professor with Peking University.

"Apart from scientific exploration, the lunar probe is a response to China's tradition, culture and imagination. China's lunar programme will proceed with the beautiful legends," Zhang said.