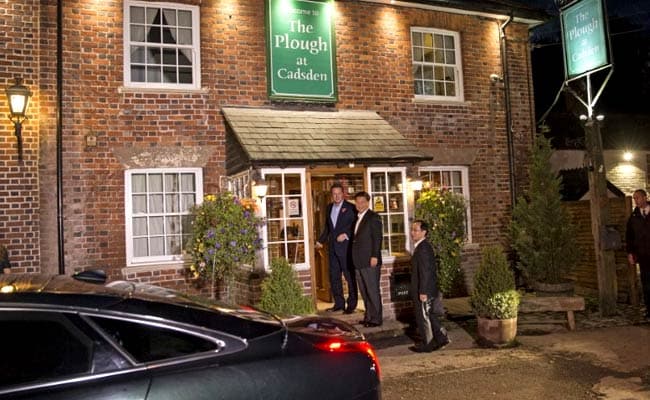 Chinese President Xi Jinping and UK's then-PM Cameron at The Plough At Cadsden Pub in 2015. (Reuters)

When Chinese President Xi Jinping visited Britain last year and went for a drink with then Prime Minister David Cameron, he walked away with a smile on his face.

Now China has walked away with the pub.

"The Plough at Cadsden" in the heart of the English countryside will go down as one of the more unusual UK buys for Chinese investors who have snapped up everything from luxury London apartments and skyscrapers to the maker of the iconic black taxi cab.

The ale and fish and chips enjoyed by the two leaders in October last year brought international fame to the watering hole, situated near the official prime ministerial country residence of Chequers, and has since attracted Chinese tourists.

"We are so excited about this new strategic partnership and adventure," said Peter Zhang, the managing director of state-backed SinoFortone Investment, which bought the Plough.

"The English pub concept is growing very fast in China," he added.

The group paid 2 million pounds ($2.6 million) for the 16th century pub, according to The Times newspaper, but a spokeswoman for Christie & Co, which brokered the deal, declined to comment on the price when contacted by Reuters.

Scores of journalists and photographers packed into the bar for a photo opportunity during Xi's visit to Britain, a trip designed to secure billions of pounds of Chinese investment.

The pub, in the Buckinghamshire village of Cadsden, some 40 miles (65 km) northwest of London, is not SinoFortone's first investment in Britain.

Last year, it said it would put 100 million pounds ($130 million) into an entertainment resort to be built by the US film studio Paramount.