China's Infrastructure Boom In Pak May Have Fewer Benefits Than Thought

Xi Jinping's multi-billion dollar economic corridor, part of his 'Belt and Road' initiative, has been viewed as a game-changer for Pakistan. Yet while local banks are keenly waiting to get their share of the pie, holding more than $20 billion for potential financing, much of it has already been filled by the Chinese with Pakistani lenders getting little look in. 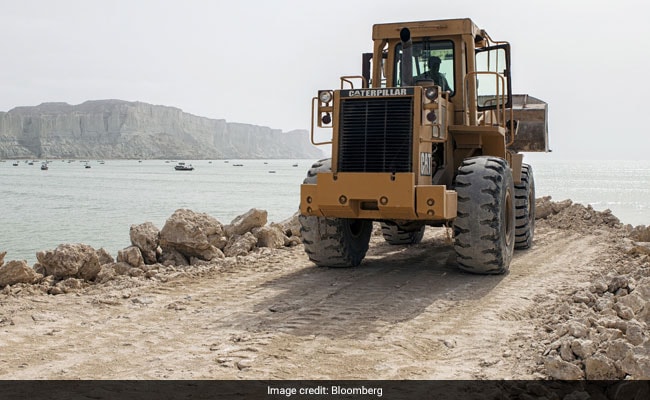 Many bankers are eager to finance Chinese projects in Pakistan.

China's ambitious $55 billion infrastructure project that's underway throughout Pakistan is in danger of becoming a non-event for the South Asian nation's banks.

President Xi Jinping's multi-billion dollar economic corridor, part of his 'Belt and Road' initiative, has been viewed as a game-changer for Pakistan. Yet while local banks are keenly waiting to get their share of the pie, holding more than $20 billion for potential financing, much of it has already been filled by the Chinese with Pakistani lenders getting little look in.

So far local funding only amounts to about $474 million, according to Saad Hashemy, research director at Karachi brokerage Topline Securities. "As of now around $6 billion to $7 billion worth of projects are likely going on," Hashemy said. "Out of that 10 percent, or around 50 billion rupees, can be local financing."

The lack of Pakistani input into the China-Pakistan Economic Corridor, which the government says will drive economic growth to a targeted 6 percent this fiscal year, adds to concerns that its benefits may not be as widely distributed as initially thought. It runs the risk that Pakistan will be left paying interest on loans to Chinese banks way into the future.

"It seems the lion's share of CPEC financing will come from China itself," said Bilal Khan, a senior economist at Standard Chartered Plc.

At $3.5 billion, the Thar coal mine is one of the most expensive energy projects China is financing in Pakistan and is expected to generate 1.3 gigawatts of electricity in coal-fired power stations. China has also agreed to lend $5.5 billion for a significant upgrade of the nation's rail system.

Bankers including Standard Chartered's Chief Executive Officer Bill Winters, who visited Pakistan in March, are eager to finance Chinese projects. Meanwhile, local lenders, both Islamic and conventional, are keen to deploy funds after parking much of their advances in government securities, holding 82 percent of the total 9.26 trillion rupees of local securities.

Shaukat Tarin, a former finance minister and an adviser to  Silkbank Ltd., said conventional Pakistan lenders could lend as much as 1.7 trillion rupees to the projects. Islamic banks are also holding surplus liquidity of about 500 billion rupees, according to Ahmed Ali Siddiqui, head of product development at Meezan Bank Ltd., the nation's largest Sharia-compliant bank.

"They have that surplus liquidity and need such avenues," said Tarin. "The question is how much are we involving the private sector at the government level in it, let alone the local banks? We aren't."
It means Pakistan's banks will have minimal opportunities for direct financing in CPEC projects, said Amreen Soorani, a senior analyst at Karachi-based JS Global Capital Ltd.

Still, Pakistan's central bank Governor Tariq Bajwa is positive about its impact. "As a developing country, do we have the space within our budget or would we have to borrow?" Bajwa said in an interview in Washington earlier this month. "I think if you want to jump the curve you have to borrow and here is money that has been made available to us."

When the project was announced in Islamabad two years ago by Xi and Pakistan's then-Prime Minister Nawaz Sharif, it was anticipated it would mostly be funded with Chinese money. Pakistan wasn't in a position to deploy the necessary capital after taking an International Monetary Fund bailout in 2013.

The Industrial and Commercial Bank of China -- the nation's biggest lender -- signed deals worth over $4.5 billion in 2015. Meanwhile, the China Development Bank is providing $7.9 billion, according to a report by the state-run China News Service on Tuesday, and Bank of China said it has lent more than $80 billion as of the end of June.

The financing demand has since increased from over $40 billion in 2015 to $62 billion in 2017, and the majority of funding so far has come from Chinese banks, said Norman Sze, national leader of the government affair unit of Deloitte China. "The finance sector in Pakistan is not very advanced and mature," Sze said. "They could participate into the projects, but it would be difficult for them to meet such a huge financing demand."

There's also been criticism over China's decision to import goods and labor for the projects at the expense of the local market, using a similar model to some of its investments in countries across Africa.

In a bid to stem these complaints, Chinese engineers at power plants being constructed along the trade corridor are working side-by-side with Pakistani counterparts who, with their increased expertise, are expected to eventually take the helm.

Promoted
Listen to the latest songs, only on JioSaavn.com
And while they may not be directly distributing loans for the new infrastructure, Pakistani banks are positioning themselves to service demand for credit that will flow as economic growth quickens.
For now they are still hopeful and looking to increase ties to China. National Bank of Pakistan is one example -- it will open branches in Beijing and Shanghai by mid-2018 and is looking to finance agriculture and export projects around the trade corridor.

"We are all set for infrastructure financing," said Saeed Ahmad, chief executive officer of National Bank over the phone from Karachi. "Local businessmen should get the opportunity, so not only Chinese investors" benefit from CPEC.