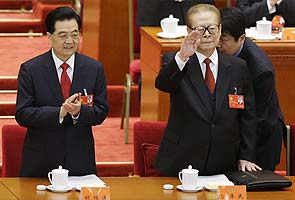 Beijing: China's outgoing President Hu Jintao warned that corruption threatened the ruling Communist Party and the state, promising political reform as he formally opened a party congress that will usher in a once-in-a-decade leadership change.

More than 2,000 hand-picked delegates gathered at Beijing's cavernous Great Hall of the People for the start of the week-long session, held against a backdrop of growing social unrest, public anger at graft and a yawning gap between rich and poor.

"If we fail to handle this issue (corruption) well, it could prove fatal to the party, and even cause the collapse of the party and the fall of the state," Hu warned in an opening speech.

But nobody expects a move towards full democracy and party spokesman Cai Mingzhao made clear on Wednesday that one-party rule was inviolate.

The party has expelled senior regional leader Bo Xilai and accused him of abusing his office, taking huge bribes and other crimes in a dramatic fall from power that has shaken the leadership transition.

"We must never let words act in place of the law or (personal) power replace the law; nor will we allow the ignoring of the law for personal benefit," Hu said.

During the congress, Hu will give up his role as party chief to anointed successor Vice President Xi Jinping. Xi then takes over state duties at the annual meeting of parliament in March.

"We should enhance our capacity for exploiting marine resources, resolutely safeguard China's maritime rights and interests and build China into a maritime power," he said.

China is also locked indispute with Southeast Asian neighbours on disputed areas in the South China Sea. Relations with the United States have been bogged down by accusations of military assertiveness in the region from both sides.

The government has tightened security in the run-up to the congress, even banning the flying of pigeons in the capital, and has either locked up or expelled dozens of dissidents it fears could spoil the party.

Security was especially tight on Thursday around the Great Hall and Tiananmen Square next door, the scene of pro-democracy protests in 1989 that were crushed by the military.

Police dragged away a screaming protester as the Chinese national flag was raised at dawn.

The party, which came to power in 1949 after a long and bloody civil war, has in recent years tied its legitimacy to economic growth and lifting hundreds of millions out of poverty.

Hu said China's development should be "much more balanced, coordinated and sustainable", and it should double its 2010 GDP and per capita income by 2020.

But China experts say that unless the new leadership pushes through stalled reforms, the nation risks economic malaise, deepening unrest, and perhaps even a crisis that could shake the party's grip on power.

Chinese growth slowed for a seventh straight quarter in July-September, missing the government's target for the first time since the depths of the global financial crisis, but other data point to a mild year-end rebound.

Advocates of reform are pressing Xi to cut back the privileges of state-owned firms, make it easier for rural migrants to settle permanently in cities, fix a fiscal system that encourages local governments to live off land expropriations and, above all, tether the powers of a state that they say risks suffocating growth and fanning discontent.

As the congress began, authorities clamped down on dissidents.

"My internet has been cut off, I can't receive telephone calls and three people follow me when I leave the house to walk my dog," Xinna, the wife of one of China's longest-serving political prisoners, Mongol rights activist Hada, told Reuters.

"All I want from this congress is my husband to be released and for our lives to get back to normal," she said from her home in the frigid northern Chinese city of Hohhot.

A Tibetan rights group reported that three teenaged Tibetan monks in the southwestern province of Sichuan set themselves on fire on Wednesday in protest against Chinese rule, bringing to almost 70 the number of self-immolations by Tibetans in 18 months.
© Thomson Reuters 2012
Comments
China