Harbor workers sort fish. Experts say the battle for fisheries resources, an often overlooked destabilizing influence in the South China Sea, is a source of unpredictability, volatility and risk.

TANMEN: In the disputed waters of the South China Sea, fishermen are the wild card.

China is using its vast fishing fleet as the advance guard to press its expansive territorial claims in the South China Sea, experts say. That is not only putting Beijing on a collision course with its Asian neighbors but also introducing a degree of unpredictability that raises the risk of periodic crises.

In the past few weeks, tensions have flared with Indonesia, Malaysia and Vietnam as Chinese fishermen, often backed up by coast guard vessels, have ventured far from their homeland and close to other nations' coasts. These are just the latest conflicts in China's long-running battle to expand its fishing grounds and simultaneously exert its maritime dominance.

"The Chinese authorities consider fishermen and fishing vessels important tools in expanding China's presence and the country's claims in the disputed waters," said Zhang Hongzhou, an expert at the S. Rajaratnam School of International Studies at Singapore's Nanyang Technological University. 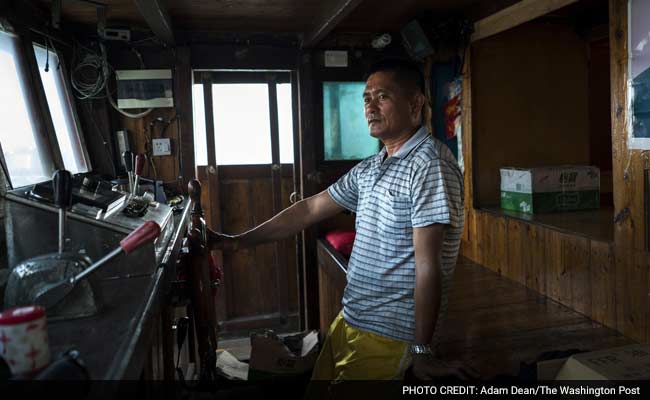 Capt. Chen Yuguo watches his boat's refitting from the wheelhouse of his trawler -- which has a poster of Mao Zedong and an expensive navigation system supplied by the government.

"Fishermen are increasingly at the front line of the South China Sea disputes," Zhang said, "and fishing incidents could trigger even bigger diplomatic and security tensions between China and regional countries."

Here, in the fishing port of Tanmen on the southern island of Hainan, 50-year-old captain Chen Yuguo was in the wheelhouse of his trawler last week, carrying out minor repairs after a six-week fishing trip to the disputed Spratly Islands.

A portrait of "Comrade" Mao Zedong hung in a place of honor behind him, alongside an expensive satellite navigation system supplied by the Chinese government. Chen said catches are much better in the Spratlys than in China's depleted inshore waters, but the captain said he is also fulfilling his patriotic duty.

"It is our water," he said, "but if we don't fish there, how can we claim it is our territory?"

Experts say the battle for fisheries resources, an often overlooked destabilizing influence in the South China Sea, is a source of unpredictability, volatility and risk. Fish caught near Hainan Island in the South China Sea are offloaded in the harbor at Tanmen.

Early this month, Vietnam seized a Chinese ship that it said was supplying fuel to Chinese fishing boats in its waters.

The biggest flare-up came on March 20, when Indonesian officials boarded a Chinese fishing vessel close to Indonesia's Natuna Islands. As an Indonesian vessel began towing the boat to shore, a Chinese coast guard ship intervened to ram the fishing boat, pushing it back into the South China Sea - until the Indonesians released the tow line.

Indonesia sets great store on its friendly relations with China, but its government responded angrily, saying it felt that its efforts to maintain peace in the disputed waters had been "sabotaged." Defense officials vowed to send bigger naval vessels to defend its patrol boats in the region, to consider introducing military conscription to remote islands in the archipelago, and even to deploy U.S.-made F-16 fighter jets to the Natunas to ward off "thieves."

China claims 90 percent of the South China Sea, drawing a "nine-dash line" around its claims that passes close to the shores of the Philippines, Malaysia, Brunei, Vietnam - and the Natunas.

China's claim to the South China Sea is based partly on the idea that its fishermen have worked there for centuries. But China is also trying to create facts on the ground by expanding its fishing industry's zone of operations, experts say.

After the fishing boats clear the way, the coast guard is next, often followed by land reclamation on rocks and reefs and finally militarization and control, said Alan Dupont, professor of international security at the University of New South Wales in Sydney.

"I call the strategy 'fish, protect, occupy and control,' " he said.

China blames the United States for militarizing the South China Sea, citing President Obama's strategic rebalance to Asia, a recent deal to post U.S. conventional forces on five military bases in the Philippines for the first time in decades, and ongoing military exercises between the two countries.

But China, Dupont said, is pursuing its own strategic plan to dominate the Western Pacific and push the United States out, trying to take advantage of an Obama administration it believes to be distracted by other global crises. But Beijing's "opportunist" policy is already backfiring, he said, uniting many countries in the region against China.

But it is not just about nationalism. Economics is a major driving force for the expansion, Zhang and Dupont say - to satisfy China's ever-growing appetite for fish and its profitable and rapidly expanding fish export industry, already the world's largest.

China's per-capita fish consumption was estimated by the Food and Agriculture Organization at nearly 80 pounds in 2010, nearly double the global average, and is growing by roughly 8 percent a year. The fish industry employs nearly 15 million people.

Compared with inshore waters, the Spratlys are much richer grounds, fishermen say, with valuable giant clams and lobsters to be harvested - although competition is growing as more boats arrive.

The government is also pushing the fishermen farther from shore. It provides fuel subsidies, with higher rates for bigger boats and journeys to the Spratlys. The Hainan government heavily subsidizes the construction of larger, steel-hulled trawlers, and an expensive satellite system was provided virtually free of charge to about 50,000 vessels.

With it, Chinese fishing crews can send emergency signals to coast guard ships with their exact location if they run into trouble.

Fishermen said the government often organizes trips to the Spratlys, with coast guard vessels in attendance, especially when tensions are high.

"When our country needs us, we will go without a second thought to defend our rights," Chen said.

Rodger Baker, the lead Asia-Pacific analyst for the global intelligence firm Stratfor, said these maritime "rights protection" voyages are China's version of the U.S. Navy's freedom-of-navigation exercises in the South China Sea. They are, he said, designed to underline China's possession of "its waters."

Embedded within the fishing communities and often organizing these trips are what China calls its "maritime militia" - civilians trained in small-arms use whose job it is to help defend the country's maritime claims.

The Tanmen Maritime Militia is the most celebrated of the groups. It was honored with a visit from Chinese President Xi Jinping in April 2013, just after he took office.

Its members played a leading role in encouraging fishermen to travel to the Spratlys as far back as 1985. Their repeated trips to Scarborough Shoal culminated in a standoff with the Philippines in 2012 that ultimately saw China seize control of the submerged coral feature, and they sparred with their Vietnamese counterparts in 2014 when China towed an oil rig into disputed waters.

Their fishing boats also helped deliver construction materials for China's land reclamation and construction program in the Spratlys. Last October, when the USS Lassen conducted a freedom-of-navigation operation near Subi Reef, the Chinese navy kept a respectful distance, but smaller merchant or fishing vessels came much closer and even crossed the destroyer's bow, Defense News reported. Experts say those boats were probably manned by militia members.

As well as giving Beijing a degree of deniability, their quasi-civilian status also complicates the rules of engagement for U.S. naval vessels.

But if China is pulling many of the strings through its maritime militia, no country in the region has full control of its fishing fleets, with captains quite capable of exploiting nationalist sentiments to expand their fishing grounds.

"There is a big risk for China in this policy," Stratfor's Baker said. "Fishing boats will go where the fish, clams and crabs are.

That, he said, means that more crises in the disputed waters are almost inevitable.