The outfitting work on the aircraft carrier Type 001A was completed yesterday, making the ship ready for its second sea trial. 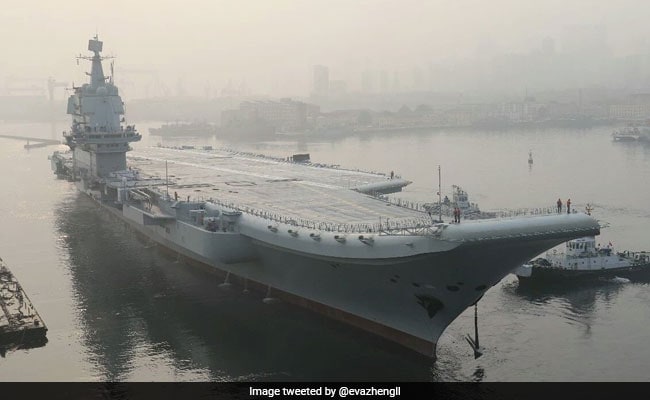 The ship is China's second aircraft carrier after the Liaoning, and its construction began in 2013 (File)

China's first indigenously built aircraft carrier is set to embark on its second sea trial after the 50,000-metric tonne vessel successfully completed the first one, according to a media report.

The outfitting work on the aircraft carrier Type 001A was completed yesterday, making the ship ready for its second sea trial.

The carrier's first sea trial was from May 13 to 18, and the success of the first trial proves that the process could be accelerated, a military expert said.

"The carrier's surface doesn't show any big changes, and the outfitting work is primarily for inspection and maintenance. After the first sea trial, the ship's instruments collected data and information, so its equipment must be adjusted based on the data," said Song Zhongping, a military expert and TV commentator.

"The carrier can be delivered to the People's Liberation Army (PLA) Navy as soon as possible," Song told state-run Global Times.

After a five-day sea trial, the carrier had returned on May 23 to the Dalian Shipyard in the Northeast China's Liaoning Province to finish its remaining outfitting work.

A report from wenweipo.com said the carrier has been moved out from the dock and is ready for its second sea trial.

"Although China already has one aircraft carrier, the Liaoning, in service, it does not mean the second one can skip steps during the sea trials," Song said.

"The Liaoning helps China gain experience in testing a huge warship like an aircraft carrier, so it can accelerate the progress for the next one, but progress has to be made step by step," Song added.

The first sea trial results for the ship, known as the Type 001A, have been successful, China Shipbuilding Industry Corporation (CSIC) Chairman Hu Wenming said on June 21, according to the company's official website.

The  People's Liberation Army (PLA) used to lack air supremacy in the South China Sea and on the high seas, Song said, adding that the aircraft carrier could help overcome that shortcoming.

The ship is China's second aircraft carrier after the Liaoning, and its construction began in 2013.

Boasting more than 12,000 pieces of equipment, the carrier has been made by 532 Chinese enterprises including many private firms.

The vessel has more than 3,600 cabins. About 3,000 workers from across China worked on the ship on a daily basis.

Promoted
Listen to the latest songs, only on JioSaavn.com
Few countries in the world have aircraft carriers. Besides India, the US, Russia, the UK, France, Italy, Thailand and China operate a total of 18 aircraft carriers.

The US is the largest operator as it runs 11 nuclear-powered carriers with each having a full-load displacement of about 100,000 tonnes.