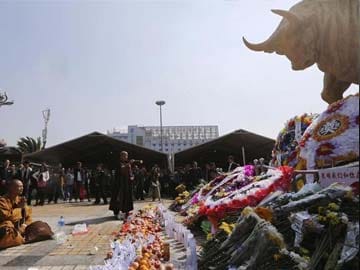 Buddhist monks pray in front of offerings and wreathes for the victims of a knife attack at Kunming Railway Station in Kunming, Yunnan province in China on March 7, 2014.

Beijing: Nervous about a repeat of the deadly knife attack at a Chinese train station in March, a well-known Buddhist temple in eastern China has drafted some of its monks into a new 'anti-terrorist' squad, state media said on Thursday.

The team at the 1,700-year-old Lingyin Temple in the tourist city of Hangzhou is made up of 20 monks and more than 20 security guards, the official Xinhua news agency quoted the temple's Buddhist Master Jueheng as saying.

The squad's members are equipped with shields, pepper spray and batons. It is the first time a Chinese temple has set up such a team, Xinhua said.

"The squad members practice Buddhism in the day and take part in training exercises at night," Jueheng said, adding police helped with the training.

"We set up the squad to guard against violence and terrorist attacks in a bid to protect the safety of visitors and Buddhism believers," he said.

The China News Service said the idea sprang from the attack at the Kunming train station in southwestern China, blamed on militants from the far western region of Xinjiang.

Thirty three people died in the terror attack, including four of the attackers, shot dead by police.

That incident "attracted the attention of temple authorities", the report said.

In another incident, a vehicle had ploughed into tourists on the edge of Tiananmen Square last October, killing the three people in the car and two bystanders.

China labelled that incident a suicide attack by Xinjiang militants.

Promoted
Listen to the latest songs, only on JioSaavn.com
Such violence has, however, generally been confined to Xinjiang and the targets are normally security forces or government officials, rather than tourist or religious sites.