The Shenzhou-15 crewed spaceship will be launched from the Jiuquan Satellite Launch Centre in northwest China on Tuesday, the China Manned Space Agency (CMSA) announced. 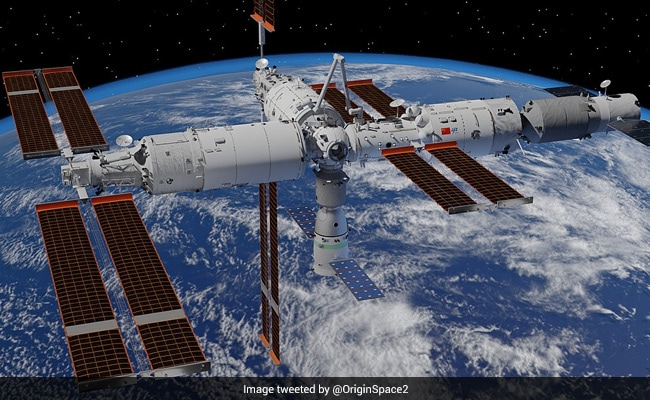 The launch will be carried out with a Long March-2F carrier rocket. (Representational)

China will be sending a three-person crew to its space station, which is nearing completion, and also announced today plans for a manned mission to the Moon amid intensifying competition with the US.

The Shenzhou-15 crewed spaceship will be launched from the Jiuquan Satellite Launch Centre in northwest China on Tuesday, the China Manned Space Agency (CMSA) announced.

The spaceship will take three astronauts -- Fei Junlong, Deng Qingming, and Zhang Lu -- to carry out the spaceflight mission.

Mr Fei will be the commander of the mission, Ji Qiming, assistant to the director of the CMSA, told the media.

The crew will stay in orbit for about six months, a period in which the construction of the low-orbit space station is expected to be completed.

The launch will be carried out with a Long March-2F carrier rocket, which will be filled with propellant soon, Ji said.

After entering the orbit, the Shenzhou-15 spaceship will make a fast, automated rendezvous and dock with the front port of the space station's core module called Tianhe, Ji said.

During their stay in orbit, the Shenzhou-15 crew will witness the arrival of the Tianzhou-6 cargo craft and Shenzhou-16 manned spaceship.

China is launching a host of rockets amid concerns over their falling debris, which is scattered around the world.

The Shenzhou-15 astronauts will return in May next year, state-run Xinhua news agency reported.

This is the third manned mission to be launched by China to link up with its space station.

Two batches comprising three astronauts were flown to the space station, on a six months mission each to build the orbiting station.

While one set of astronauts returned, another set of three astronauts is currently based in Tianhe.

According to an earlier announcement by the China Aerospace Science and Technology Corporation (CASTC) the low-orbit space station construction was expected to be completed this year.

Once ready, China will be the only country to own a space station.

The International Space Station (ISS) of Russia is a collaborative project of several countries.

China Space Station (CSS) is also expected to be a competitor to the ISS built by Russia.

Observers say the CSS may become the sole space station to remain in orbit once the ISS retires in the coming years.

Ji also announced plans to send a manned mission to Moon amid intensifying competition with the US.

The US space agency National Aeronautics and Space Administration (NASA) launched its most powerful rocket on November 16 from Cape Canaveral in Florida.

The objective of the 100m-tall Artemis vehicle was to hurl an unmanned astronaut capsule in the Moon's direction.

The spacecraft, known as Orion, is uncrewed for this particular flight, but its future missions will be manned missions to explore the lunar surface.

"China's footsteps in space exploration will not stay only in the low-Earth orbit, and we will surely fly further," Ji said when asked when China will land on the Moon. "The country is ready to implement the lunar landing project. I believe the dream of landing on the moon will come true in the near future," Ji was quoted as saying by Xinhua.

China in the past successfully launched uncrewed missions to the Moon which included Yutu 2 a rover that sent back pictures of the little-explored far side of the Moon.

China has also sent a rover to Mars.