China Vows Measures After THAAD Deployment: 'US Will Bear Consequences' 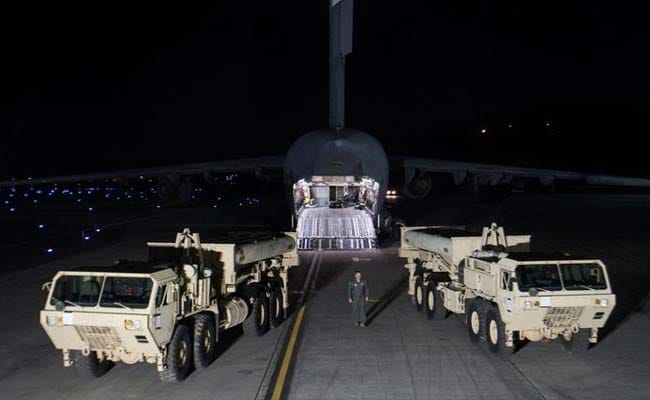 Beijing: China said Tuesday it would "resolutely" defend its security interests as the US began deploying the THAAD missile-defence system in South Korea that Beijing fears will undermine its own military capabilities.

"We are firmly opposed to the deployment of THAAD in the Republic of Korea by the US and the ROK," foreign ministry spokesman Geng Shuang told reporters at a regular press briefing in Beijing.

"China will resolutely take necessary measures to defend our own security interests. All consequences entailed from this will be borne by the US and the ROK."

The US Pacific Command said Monday its military had begun deploying the Terminal High Altitude Area Defense (THAAD) system to South Korea, which is aimed at defending the US ally from a North Korean attack.

The latest tests by nuclear-armed North Korea came Monday when it launched four missiles that it said were part of training for a strike on US bases in Japan.

Three of the missiles came down in waters provocatively close to Japan.

Beijing has railed against the deployment of THAAD, while the South Korean conglomerate Lotte Group has come under pressure in China for providing land to host the system.

Geng, the Chinese foreign ministry spokesman, did not specify what measures China would take.

"We strongly urge relevant parties to stop the deployment and not to travel down that wrong path," he said.

Promoted
Listen to the latest songs, only on JioSaavn.com
The THAAD system is meant to intercept and destroy short and medium-range ballistic missiles during their final phase of flight.
© Thomson Reuters 2017