The virus is still spreading rapidly around the world, with well over 37 million infections, and nations that had suppressed their first outbreaks are now struggling with fresh surges -- especially in some parts of Europe. 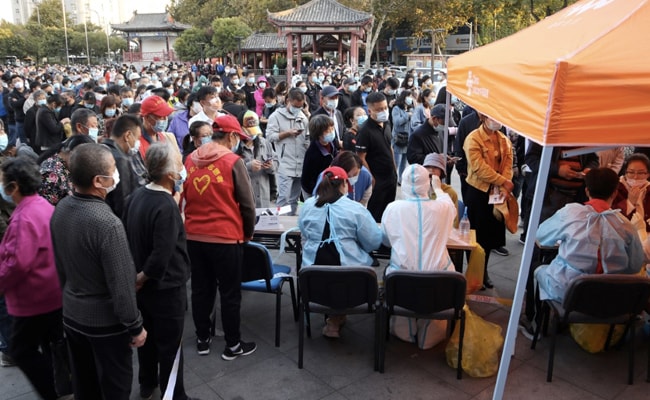 Residents lining up to be tested for coronavirus, as part of a mass testing program.

China rushed Tuesday to test an entire city of nine million within days after a minor coronavirus outbreak, as the WHO warned that letting the pathogen run free to achieve herd immunity was "scientifically and ethically problematic".

The virus is still spreading rapidly around the world, with well over 37 million infections, and nations that had suppressed their first outbreaks are now struggling with fresh surges -- especially in some parts of Europe.

In the absence of a vaccine, governments are wary of allowing the virus to spread unchecked, with China launching a sweeping drive to test all residents of Qingdao after a handful of cases were detected on Sunday.

"As of 8 am... our city has taken 3.08 million samples for nucleic testing," the city's health commission said Tuesday, adding that no new positive samples were found.

Chinese officials intend to test the entire city -- around 9.4 million people -- by Thursday.

In scenes contrasting with the fumbled testing efforts of other nations, health workers in protective clothing swiftly set up tents and residents queued deep into Monday night to provide samples.

In opposition to economically painful lockdowns and social distancing, there have been proposals in some countries to let the coronavirus circulate in the population to build up "herd immunity" -- where so much of the population has been infected there are insufficient new victims for the virus to jump to.

But the World Health Organization said such plans were unworkable, and required mass vaccinations to work.

"Herd immunity is achieved by protecting people from a virus, not by exposing them to it," WHO chief Tedros Adhanom Ghebreyesus said Monday, describing the idea as "scientifically and ethically problematic".

"Allowing a dangerous virus that we don't fully understand to run free is simply unethical. It's not an option."

Further illustrating the challenge, a study published in The Lancet Infectious Diseases journal indicated that exposure to the virus may not guarantee future immunity -- and the second infection could come with even more severe symptoms.

- Vaccine setback -
The pandemic has claimed more than one million lives worldwide, and spurred breakneck efforts to develop vaccines and effective treatments.

Some have made it to late-stage clinical testing, but the optimism was dented Monday when Johnson & Johnson announced it had temporarily halted its 60,000-patient trial because of an unexplained illness in one participant.

There are ten firms conducting Phase 3 trials of their candidates globally, including Johnson & Johnson.

The pharma giant has been awarded about $1.45 billion in US funding under Operation Warp Speed, championed by President Donald Trump, who is keen for a political boost ahead of the November election with a coronavirus breakthrough.

Critics have excoriated Trump for his handling of the crisis, with more known infections and deaths in the United States than anywhere else in the world.

Trump was sidelined from the campaign trail for 10 days after he got Covid-19, but returned to the stage Monday.

"I went through it and now they say I'm immune... I feel so powerful," Trump told a cheering crowd in Florida, few of whom wore masks.

His claim of immunity is unproven.

European nations are trying to contain new surges in infections, and governments are rolling out tighter restrictions to avoid the devastation of the earlier outbreaks.

Cases have soared in France, Germany, Poland, and the Czech Republic in recent days.

And there has also been a spike in Britain, which has the highest death toll in Europe.

Prime Minister Boris Johnson ordered pubs in Liverpool to shut as part of a new strategy to tackle a surge in infections.

He said businesses forced to close would get support from the government, but his focus on shutting hospitality venues sparked anger.

"I don't think there'll be many businesses after this lockdown."