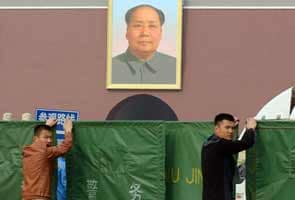 Newspapers across China carried news of Monday's crash -- which killed five people and injured dozens -- low down on their front pages and ran brief reports from state-run media, highlighting official efforts to control discussion of the incident, which struck at the symbolic heart of Chinese state power.

Chinese media outlets are known to receive direct instructions from the government directing their reporting of events deemed threatening by the ruling Communist party, which in recent months has moved to tighten controls over all forms of media.

The Beijing News, generally an outspoken paper, gave priority to reports of a protest by doctors in eastern China. Like other newspapers, it did not run a report of the event by its own journalists, and republished an account from the official news agency Xinhua.

The state media reports, carried by all major newspaper and news websites, stressed official rescue efforts and did not contain information about whether the incident was deliberate.

An outspoken news website, Uighurbiz.net, said that a journalist in China received a government order that: "No content, pictures or video can be added and the headline cannot be changed, look out for comments -- if they cannot be controlled, then close off comments."

The order could not be confirmed by AFP.

Reports on the crash by the Southern Metropolis Daily newspaper were quickly deleted from their website. It is based in the southern city of Guangzhou -- nearly 1900 kilometres (1180 miles) from Beijing -- and was apparently the only newspaper to publish its own coverage.

Chinese social media sites, which are closely controlled albeit less strictly than print media, were an early source of pictures of the crash and speculation that it was an act of protest, but eyewitness accounts were rapidly removed.

One eyewitness who posted photographs online told AFP that he had been contacted by Sina staff warning him not to post further information. The eyewitness asked to remain anonymous out of fear of official reprisals.

Chinese broadcasters did not show updates from reporters at the scene of the incident, while police detained foreign journalists who tried to do so, ordering them to delete photographs.

Promoted
Listen to the latest songs, only on JioSaavn.com
Some Internet users contrasted state broadcaster CCTV's coverage of the Tiananmen crash -- it did not mention it on its flagship evening bulletin -- with its live reports after a vehicle rammed the gate of the White House in Washington recently.

"CCTV immediately arrived on the scene to report, and broadcast the images across China... no American police stopped the reporter," a historian called Cao Junshu wrote on Sina Weibo.
Comments
Tiananmen SquareChina