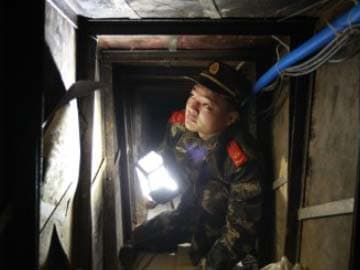 The underground path had "one end in a rented garage in Shenzhen and another in a thicket of reeds in Hong Kong, totally concealed", said a report posted on the official website china.com.cn.

"It was dug in a totally professional way," it said.

Semi-autonomous Hong Kong, along with Shenzhen in mainland China, are both important trade hubs for the fast-growing and massive market.

But the two have very different tariff systems.

The as-yet unidentified smugglers sought to exploit their proximity by building a 40-metre-long (130 feet) underground passage and installing a rail track and wagon with a block-and-tackle system to ferry goods such as cell phones and tablet computers.

The tunnel stood about 0.8 metres wide and 1 metre high, just big enough for an adult to crawl through.

It started from a remote area of Shenzhen, in a garage full of bags packed with sludge dug up from the tunnel, and ended in a cluster of tall reeds a few metres past a river dividing mainland China and Hong Kong, with the nearest village 20 metres away.

The project was estimated to have cost three million yuan ($490,000) and taken four months to build.

Promoted
Listen to the latest songs, only on JioSaavn.com
Border officers discovered the tunnel a week ago, and a nearby resident said she heard drilling noises for one or two nights but assumed they were for renovations.

The man who rented the garage had used a fake ID, authorities were quoted as saying.