Thousands of masked pro-democracy demonstrators briefly occupied the road outside the office in the semi-autonomous city Sunday night and targeted the building with eggs, projectiles, laser lights and graffiti in a stark rebuke to Beijing's rule. 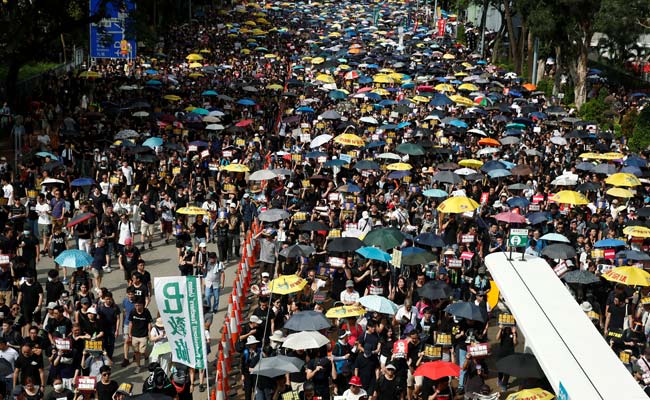 China reacted furiously on Monday to anti-government protesters vandalising the walls of its representative's office in Hong Kong and defacing the national emblem, branding their actions "absolutely intolerable".

Thousands of masked pro-democracy demonstrators briefly occupied the road outside the office in the semi-autonomous city Sunday night and targeted the building with eggs, projectiles, laser lights and graffiti in a stark rebuke to Beijing's rule.

Hong Kong has been shaken by massive, sometimes violent, protests initially organised to oppose a now-suspended bill that would have allowed extraditions to mainland China.

They have now morphed into a wider and sometimes violent movement for democratic reforms.

"Actions by some radical demonstrators have affected the bottom line of the 'one country, two systems' principle, and that is absolutely intolerable," foreign ministry spokesman Geng Shuang said in Beijing, referring to the former British colony's special status under the terms of its 1997 handover to China.

Geng said Beijing opposes all acts of violence and "firmly" supports the use of "all necessary measures to safeguard central government agencies in Hong Kong".

Protesters have vowed to sustain pressure until their core demands -- including universal suffrage and the resignation of the city's pro-Beijing leader Carrie Lam -- are met.

So far, Beijing has refused to budge. Officials and state media have accused the protesters of playing into the hands of foreign powers who seek to harm China, and backed the Hong Kong government.

Beyond agreeing to suspend the extradition bill, there have been few other concessions and fears are rising that Beijing's patience is running out.

"These (acts)... have seriously damaged the feelings of all Chinese people including seven million Hong Kong compatriots," Wang Zhimin, China's top envoy to the city, told reporters, calling on authorities to pursue the "rioters".

Radical protests have "insulted the country and the nation", Chinese Communist Party mouthpiece People's Daily declared in a front-page article.

"These acts of violence seriously undermined Hong Kong's social order and trampled on the rule of law."

Under the handover deal, China promised to allow Hong Kong to keep key liberties such as its independent judiciary and freedom of speech -- but many say those provisions are already being curtailed.

But Beijing has reacted angrily to other governments and foreign officials expressing solidarity with Hong Kong's pro-democracy movement, warning them against interfering in China's domestic affairs.

The foreign minister of Taiwan -- the self-ruled democratic island that China considers parts of its territory -- called for "genuine" democratic elections in Hong Kong.

"These little tricks are doomed to be unsuccessful," he said.

In an editorial, the state-run China Daily said the "violence unleashed by some fanatic elements is not really against the bill to amend the extradition law... (but) to advance their own political agenda".

The newspaper warned that the clashes in Hong Kong go against the views of the "silent majority", who want to "live a peaceful life and strive to achieve their dreams rather than rack their brains over politics".

(Except for the headline, this story has not been edited by NDTV staff and is published from a syndicated feed.)
Comments
Hong Kong protestsChinaanti-government protesters