North Korea has friendly ties with both Beijing and Moscow, and China is by far its biggest trading partner. 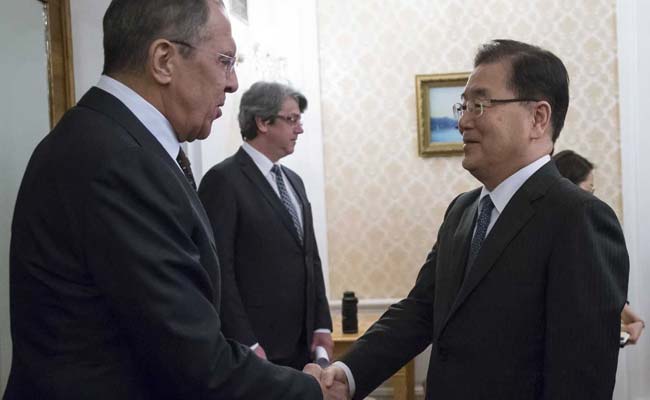 During the past week, National Security Office head Chung Eui-yong briefed officials in Beijing and Moscow following his dramatic success in arranging summits between the North Korean, South Korean and US leaders.

"Xi Jinping offered a Chinese phrase that says 'once hard ice melts, spring comes and flowers bloom' to describe the situation on the Korean peninsula and expressed his willingness to support the current situation," Chung told reporters on his return to Incheon International Airport.

North Korean leader Kim Jong Un told the South Korean delegation led by Chung that he was open to addressing denuclearising with the United States, an offer that led to US President Trump agreeing to meet Kim for a summit expected to happen sometime in May.

There was growing speculation on Thursday that Trump and Kim will meet Sweden, after its foreign ministry announced North Korea's Foreign Minister Ri Yong Ho was arriving imminently for two days of talks with his Swedish counterpart, Margot Wallstrom.

South Korean President Moon Jae-in is set to hold a summit with the North's Kim by the end of April.

The committee is comprised of presidential and government officials including the ministers of unification, foreign affairs and defence, Kim said.

Separately, a South Korean official said it was too early to discuss joint economic projects with Pyongyang.

The flurry of diplomatic activity comes after a year-long verbal spat between Kim Jong Un and Trump, with tensions exacerbated by multiple missile and nuclear tests by the North which has said it will forge on with its nuclear programme to protect its regime.

"China and Russia agreed to continue cooperation to uphold the peace that has been created, as well as the momentum for stability through close communication," Chung said.

North Korea has friendly ties with both Beijing and Moscow, and China is by far its biggest trading partner.

Pyongyang has remained silent over its agreement for the summits since Chung returned from the North, although officials in Seoul have said they expect to continue working talks soon to work out details for the inter-Korean summit.

Promoted
Listen to the latest songs, only on JioSaavn.com
Rong's sudden visit to Sweden spurred talk that the summit could take place there. Sweden's embassy in Pyongyang represents US diplomatic interests in North Korea in the absence of US diplomatic relations with the country.
© Thomson Reuters 2018