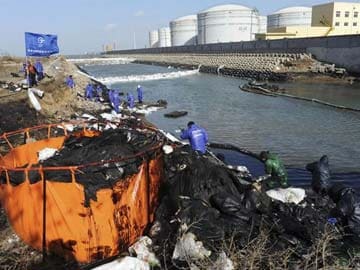 Workers clean up leaked oil after an oil pipeline explosion in Qingdao, Shandong province in China on November 27, 2013.

Beijing: China has punished 48 people, including the chairman of Asia's top refiner, for one of the country's worst industrial disasters last year that killed 62 people, state news agency Xinhua said on Friday.

The blast at the eastern oil hub of Qingdao in November was China Petroleum & Chemical Corp's (Sinopec) deadliest known accident.

China's cabinet, or State Council, has agreed to "discipline" 48 people, including Sinopec Chairman Fu Chengyu and the mayor of Qingdao, Zhang Xinchao, over the oil pipeline explosion, according to Xinhua's microblog.

Fifteen people, who are suspected of crimes, have had their cases transferred to judicial authorities, Xinhua said.

The explosion at the Dongying-Huangdao II pipeline owned by Sinopec was attributed to pipeline corrosion, irregular work practices and a tangled network of underground pipes, an inspector with China's safety watchdog said on Thursday.

The blast injured 136 people and caused direct economic losses of 750 million yuan. Many of the dead were workers who were trying to repair a leak.

During a visit to the scene in November, Fu apologised to the people of Qingdao, where the explosion stirred anger as residents had not been warned of danger even though the leak was discovered almost eight hours before the blast, state media say.

Promoted
Listen to the latest songs, only on JioSaavn.com
China has uncovered nearly 20,000 disaster risks in its oil and gas sector nationwide during a safety probe, the country's safety watchdog said.