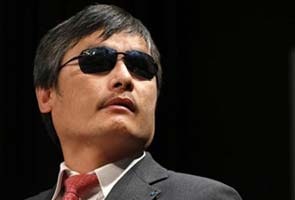 New York: Chen Guangcheng, the Chinese dissident who fled his home country to become a visiting scholar at New York University, accused the school on Sunday of asking him to leave because of "unrelenting pressure" from China.

The university denied the claim, saying that it had said last year before the blind dissident arrived that his fellowship would last up to a year and end sometime this summer.

Chen sparked a diplomatic crisis between the United States and China after he fled house arrest last year and sought refuge at the US Embassy in Beijing. The university helped Chen come to the United States after he expressed fears for his family's safety if they were to remain in China.

In a statement, Chen thanked the university for its hospitality and "good support," but accused it of giving in to the Communist Party of China.

"In fact, as early as last August and September, the Chinese Communists had already begun to apply great, unrelenting pressure on New York University, so much so that after we had been in the United States just three to four months, NYU was already starting to discuss our departure with us," he wrote.

Chen, who was born blind and taught himself law, was a campaigner for farmers and disabled citizens. He exposed forced abortions in China before he was placed under house arrest in Shandon province.

He has continued to be critical of China's human rights record since his arrival in New York in May 2012 with his wife and two children.

Chen said he believed the Chinese government wanted "to make me so busy trying to earn a living that I don't have time for human rights advocacy, but this is not going to happen."

The university pointed to a PBS television interview in May 2012 with Jerome Cohen, an NYU law professor and friend of Chen who helped broker his departure from China. Cohen said Chen would be at NYU for a year at most while he adjusted to a new country.

Chen could not be reached for comment on Sunday.

John Beckman, an NYU spokesman, described Chen's claims as "both false and contradicted by the well-established facts."

"Mr. Chen's fellowship at the university and its conclusion have had nothing to do with the Chinese government. All fellowships come to an end," Beckman said in a statement.

The university said Chen had received offers from two other academic institutions. Fordham University Law School in New York said on Friday it was in talks with Chen, and the identity of the second institution has not been made public.

Beckman said NYU had started talking with the Chens about changes in living arrangements months ago. The school has provided them services that include housing, food, insurance and healthcare, English lessons and family support, he said.

Promoted
Listen to the latest songs, only on JioSaavn.com
NYU has been building a campus in Shanghai, and received final approval from China's education ministry to begin construction and student recruitment last autumn.