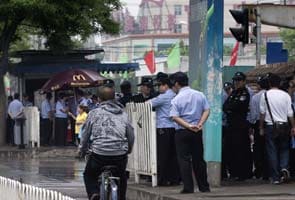 With anti-riot vans and helmeted paramilitary forces, policein China's capital have smothered a southern district for a second day after aprotest by hundreds of migrant workers. The move underscores Beijing'ssensitivity over unrest fueled by anger over social inequality.

The heavy police presence on Thursday around a bustlingwholesale clothing market in Beijing's Fengtai district was imposed a day afterhundreds of migrants rallied outside the building over the death of a22-year-old woman from the central province of Anhui.

The woman, Yuan Liya, had worked in the mall sellingclothing until her body was found Friday near the exit of an undergroundparking garage.

Police have ruled the death a suicide, but protestersbelieve she may have been slain and say the investigation has been poorlyhandled.

Promoted
Listen to the latest songs, only on JioSaavn.com
Comments
Chinaprotest