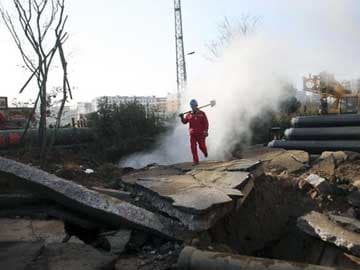 A labourer walks past debris and new pipelines as he carries out repairing works after an oil pipeline explosion in Qingdao, Shandong province on November 25, 2013.

Beijing: A Chinese oil pipeline punctured twice a week by oil thieves cleared a safety inspection just two months before a section of the line exploded and killed 62 people in November, sources at the pipeline operator Sinopec said.

Initial findings of an investigation showed crude oil leaking from the pipeline into urban storm drains appeared to have fueled the explosion, the worst accident at facilities owned and operated by top Asian refiner China Petroleum & Chemical Corp (Sinopec).

The case highlights the risks involved as both energy pipeline networks and China's cities expand rapidly. Urban development has engulfed many existing pipelines, providing an opportunity for thieves but also leaving lines dangerously close to residents, industry and commerce.

The Dongying-Huangdao II pipeline was breached on average more than 100 times a year by thieves to siphon off oil, a source at the pipeline subsidiary of Sinopec <600028.SS> said.

They declined to be identified, saying information about the accident remains sensitive as the authorities conduct their investigations. Sinopec declined to comment.

"The problem of energy thieves and the clash with urban infrastructure hasn't been given enough attention," said Lin Boqiang, director of the China Centre for Energy Economics at Xiamen University in southeast China.

"With the pipeline boom in China, there are problems with safety management of pipelines."

The blast occurred in the eastern Chinese city of Qingdao in Shandong province and the official investigation ordered by Beijing has yet to be completed.

Yang Dongliang, the national director of the State Administration of Work Safety, blamed the explosion on a "serious dereliction of duty", China's official Xinhua news agency reported last month. It did not give any further details on the cause.

Sinopec warned another local government in the city of Weifang, also in Shandong, in 2011 and 2012 that rapid urbanisation, including near the Dongying-Huangdao II pipeline, was impeding access and vital repair work on pipelines.

Sinopec received no reply from the local government, the source with Sinopec's pipeline subsidiary said.

"With the expansion of cities, suburban areas have become downtown areas with lots of buildings and dense population. The spaces around pipelines have been occupied, resulting in inability to conduct maintenance," Sinopec said in a public notice to Weifang bureau for environmental protection in 2011.

The authorities detained nine people as a result of the explosions, including seven Sinopec workers and two government officials.

Sinopec has also suspended two executives with direct responsibility for the pipeline, pending an investigation.

China has become the world's largest net importer of oil and consumption of natural gas is growing rapidly. To supply the vast quantities of energy needed to fuel its economy, China's trunk oil-and-gas pipelines have more than doubled in length since 2004, rising from 40,000 kilometres (25,000 miles) to more than 100,000 kilometres.

Ageing pipelines in northeast and eastern China built in the 1970s may be more vulnerable to accidents, said Jiang Yifang, Vice Director of the Underground Pipeline Committee of China Urban Planning Association.

Urban expansion since 2000 has left pre-existing oil-and-gas pipelines in close proximity to industrial, residential and commercial areas, Jiang said. The urban pipelines, such as for water and drainage, have been laid closer than they should have been to energy pipelines, he said.

About 250 Chinese cities, or less than half of China's total, surveyed their underground pipeline networks between 2000 and 2011. It remains common for Chinese cities to have no centralised record of pipeline routes and layouts, Jiang said.

There is no nationwide database of underground pipelines, he added. Even in cities that have compiled data, the local governments may not share the information with the companies that need it, he said. Companies seeking to build new pipelines often have to gather information themselves.

China passed the Oil and Gas Protection Law in Oct 2010, requiring all new pipeline projects be at a safe distance from nearby infrastructure, and banning activities that threatened pipeline safety and operations. Jiang said little had been done to address problems with older pipelines.

To improve older infrastructure, the government would first have to clarify who should bear the cost of rerouting pipelines and any other required changes to the urban landscape.

"This is a historical debt. The question is who will pay for the debt and who can make a powerful decision to pay the debt," said Peng Xiaoyan, top advisor of GSD-Green Symbiosis, a safety management consultancy.

The Chinese government on Friday launched a nationwide safety probe of all its oil-and-gas pipelines in the wake of the Qingdao blast.

The government ordered nationwide industrial safety checks in June. Sinopec itself completed a one-month quality, safety, health and environmental protection (QHSE) check across all its facilities in mid-September, its website says.

The company detailed more than 8,000 safety problems ranging from oil-and-gas well management through to standards at rented oil storage facilities.

Promoted
Listen to the latest songs, only on JioSaavn.com
That was the check that deemed that the Dongying-Huangdao II pipeline met the company's safety standards, a source familiar with the situation said.

"Sometime the dangerous period is after the safety checks because plant officials and workers are exhausted during the checks and relax afterwards," Peng said.
© Thomson Reuters 2013