5-Day Lockdown In Chinese City, This Test Must For Residents Everyday

Residents of Zhenghzhou's city centre cannot leave the area unless they have a negative Covid test and permission from authorities. 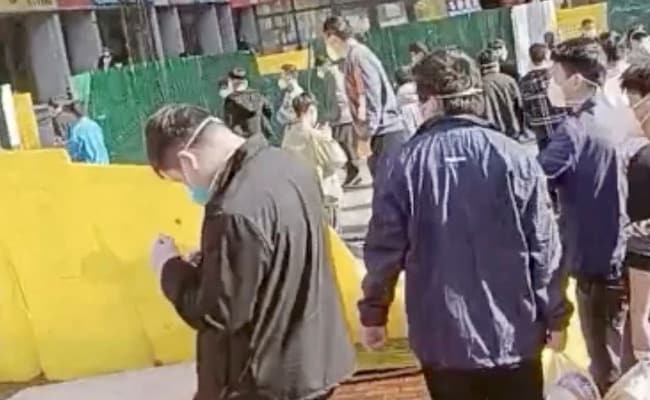 A central Chinese city home to a vast iPhone factory has ordered an effective Covid lockdown for several districts, after violent protests that saw demonstrators clash with police erupted at the facility.

Residents of Zhenghzhou's city centre cannot leave the area unless they have a negative Covid test and permission from authorities, and are advised not to leave their homes "unless necessary", the local government said.

The restrictions, which will last five days from midnight Friday, affect more than 6 million people -- about half the city's population.

The government notice, issued late Wednesday, also requires the residents of eight districts to take a nucleic acid test every day during the five-day period.

The factory, owned by Taiwanese tech giant Foxconn, has itself been under Covid restrictions for over a month amid spiralling cases in its worker dormitories.

Footage emerged last month of panicking workers fleeing the site on foot in the wake of allegations of poor conditions at the facility.

The Zhengzhou government on Wednesday said the city's outbreak was "still severe and complicated".

The country's daily tally of Covid cases hit a record high on Thursday, at 31,454 domestic cases -- relatively small compared with China's 1.4 billion population but exceeding the peak recorded in mid-April when Shanghai was under lockdown.

Zhengzhou on Thursday recorded 675 new Covid infections -- the vast majority of which were asymptomatic.

World Has No Faith In Covid Figures Released By China: Report