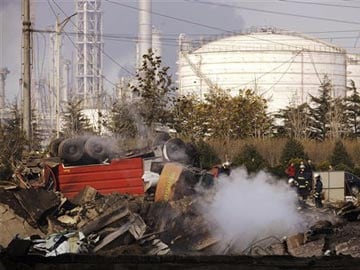 Beijing: The death toll from an oil pipeline explosion in a Chinese coastal city rose to 52 on Sunday, as rain and the close proximity of dangerous gases hampered the rescue operation, state media said.

Friday's blast ripped up roads and sent thick black smoke billowing into the sky, resulting in 18,000 people being evacuated from nearby urban areas.

Rescue teams were still searching for 11 people who were believed to be missing in the deadly accident, Xinhua said. "Rescue efforts continued Sunday despite rainy weather," the report said.

"The complicated situation and the remains of flammable gas at certain sections in the explosion area hindered the debris-clearing progress."

The pipeline, run by state-owned oil giant Sinopec, sprang a leak early Friday and exploded several hours later as workers sought to repair it, the Qingdao municipal government said in its verified account on Sina Weibo, a Chinese equivalent of Twitter.

Xinhua said Sunday that six professional firefighters from Sinopec were among the dead.

China has a poor record on industrial safety as lax law enforcement and corruption enables business owners to cut corners or offer bribes to evade standards.

Promoted
Listen to the latest songs, only on JioSaavn.com
Around 28,000 people were killed or went missing in workplace accidents in the first half of this year, state media have reported.