China has stepped up military spending and dominates the South China Sea, through which Japan's trade with major markets flows. 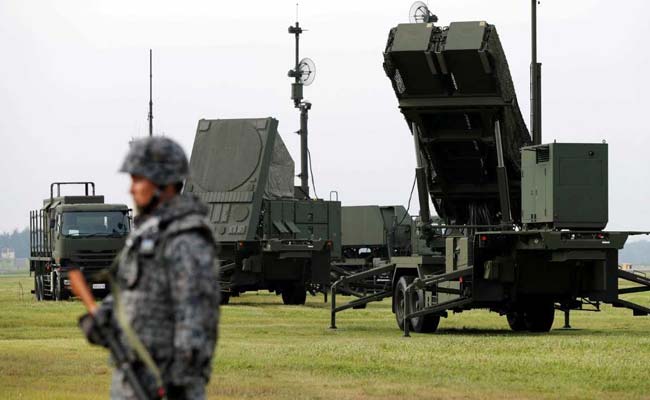 A Japan Self-Defense Forces soldier takes part in a drill to mobilise their PAC-3 missile unit.

Tokyo,Japan: North Korea's growing missile arsenal might be the most obvious and immediate military threat facing Japan, but defence planners in Tokyo are focused on a much larger and more challenging foe as they prepare for the years ahead.

China has stepped up military spending and already dominates the South China Sea, through which Japan's trade with major markets including Europe and the Middle East flows.

Now, Japanese military experts are worried Beijing may be on the brink of opening access to the Pacific through a Japanese island chain that has marked the limit of China's military influence for decades.

Tokyo sees unfettered passage for Chinese warships and warplanes through the Okinawan island chain as a threat to vital sea lanes. For China that access is part and parcel of becoming a global superpower.

"Now, we are evenly matched but the reality Japan faces is that it is becoming the underdog," said Nozomu Yoshitomi, a professor at Nihon University in Tokyo who advised Japan's government as a Self Defence Forces military analyst.

In addition to having Asia's second-largest military, Japan is also defended by U.S. forces that have used the country as their main Asia base since the end of World War Two. Under a security treaty, Washington is obliged to aid Tokyo if its territory is attacked.

China has "essentially established de facto control over the South China Sea and the East China Sea is next," said a retired senior U.S. military commander on condition he wasn't identified. "The United States, for its part, has been in relative retreat in the Western Pacific for a decade."

Beijing is ramping up military spending to build a world-class fighting force by 2050 with advanced kit, including stealth jets and, according to state-run media, a nuclear-powered aircraft carrier.

That would also be around a third of what the United States pays for the world's most powerful military, including 30,000 marines in Okinawa and a navy carrier attack group based near Tokyo.

"The pace of Chinese activity in waters around Japanese territory has expanded and accelerated," Japan's Minister of Defence Itsunori Onodera said this month. "China is building the capacity to operate in distant seas and that can be see with China's acquisition of its first carrier and its construction of a second flat top."

China says its military is for defensive purposes and its intentions in the region are peaceful. China's Defence Ministry did not respond to a request for comment.

Japan's defence outlays for the past five years have risen by just 1 percent a year. It will likely grow at around the same pace over the next five year plan as health and welfare spending on an aging population takes priority, a government defence official said.

"Finance is our weakness, but our strength is the resilience of our society," said another defence ministry adviser, who also asked not to be identified. If Japan is able to hunker down long enough, he explained, the threat from China should recede as future internal strife, economic woes or other events prompt a retreat.

To restrain Beijing in the meantime, Japan needs advanced weaponry and new munitions able to strike targets further away, said the sources with knowledge of the plans.

Japan's defence reviews, which will likely be released in December, may propose it establish its first joint command headquarters to coordinate air, ground and naval forces and strengthen cooperation with Washington, the sources said.

New equipment may include amphibious ships along with aerial drones to monitor Chinese activity and potentially target missiles in the boost phase of any launch.

Japan's military will get new air and ground missiles able to hit shipping and land targets at greater ranges. It will also place fresh orders for Lockheed Martin Corp F-35 stealth fighters including vertical take off and landing versions, the sources said.

The review will lay out plans to train more Ground Self Defence troops (GSDF) in marine fighting tactics and for their wider deployment to Okinawa. The GSDF's unit there will grow to division strength from a battalion, said former defence minister Gen Nakatani.

Yet as Tokyo formulates those plans, Beijing is already testing Japanese defences.

In a maneuver in January that Japan protested as a "serious escalation", a Chinese submarine entered waters contiguous to disputed islands in the East China Sea claimed as the Senkaku in Japan and Diaoyu in China.

China can "test the readiness and response of Japanese forces, to better understand Japanese defenses, and, over time, to engage in peacetime attrition," said Toshi Yoshihara, a professor and Senior Fellow at the Center for Strategic and Budgetary Assessments in Washington. "If Chinese operations become routine, they force Japan to accept the PLA's growing presence as a fact of life."

Tokyo was especially alarmed in November when six Xian H-6 bombers flew through a 290 km (180 mile) gap in Japan's island chain between Okinawa and Miyakojima, accompanied by an electronic warfare TU-154 and a Y-8 monitoring plane.

One senior defence official said the exercise "looked like a practice strike package on Guam", another major U.S. military base.

China's Defence Ministry did not respond to request for comment on the exercise.

"The pace of Chinese activity is faster than we anticipated," Nakatani said at his Tokyo office, where an arrow scribbled on a map of Japan on the wall highlighted the breach in the island chain. "Japan's security environment has not been this harsh since World War Two."
© Thomson Reuters 2018

(This story has not been edited by NDTV staff and is auto-generated from a syndicated feed.)
Comments
China militaryNorth KoreaSouth China Sea