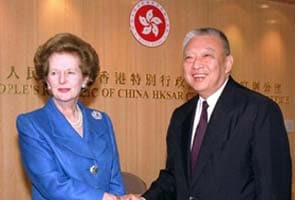 Beijing: Margaret Thatcher was an "outstanding" leader who wisely compromised over Hong Kong's future, Chinese state media said on Tuesday, although reactions to her death in the territory itself were mixed.

The news of the former British prime minister's death at the age of 87 featured on the front-pages of most major Chinese newspapers, with the English-language China Daily also devoting the whole of its back page to her.

During her time in power the key issue between London and Beijing was the future of the then-British colony in southern China, where Britain's lease on the New Territories area of Hong Kong was to expire in 1997.

The signing of the Joint Declaration between Britain and China in 1984 which began the handover process was recognised as a key concession she made to Beijing, the state-run Global Times said in an editorial.

The agreement followed a brief but bloody war with Argentina in 1982 in which Thatcher "impressed the world with her hardline stance", it added.

"But Thatcher managed to understand that China is not Argentina and Hong Kong is not the Falklands," it said. "We can say that she made her biggest compromise as prime minister in this issue."

The editorial, carried in the English and Chinese editions of the paper, added: "The complicated political environment in which she held her role, a golden era for politicians, made her outstanding."

But the newspaper said her "iron stance" could not be replicated now because of the "decline in European power" and because the "evolution of Western electoral culture makes politicians weak at solving domestic problems".

A decade after the 1997 handover of Hong Kong to Beijing, Thatcher spoke of her regret, saying that she had been unable to persuade China's paramount leader Deng Xiaoping to extend Britain's lease on most of the colony.

Although Britain held Hong Kong Island and part of Kowloon in perpetuity, the future of the territory as a whole was seen as untenable if shorn of its populous hinterland in the New Territories, bordering the Chinese mainland.

In Hong Kong itself, liberals who led a long fight to entrench a semblance of democracy before the handover expressed ambivalence about Thatcher's legacy.

"One couldn't help getting angry. Britain had ruled Hong Kong for more than 100 years, but it did not give democracy to Hong Kong even when it was planning to hand it over to China," she told the South China Morning Post.

Hong Kong has retained a semi-autonomous status since 1997 with its own legal and financial systems, as well as civil liberties not seen on the mainland. But the city of seven million does not yet get to choose its leader by popular vote.

Activists have been pressing for full democracy under Chinese rule.

Others said Thatcher had done the best she could for Hong Kong.

Former lawmaker Selina Chow, who was present at the signing of the Sino-British Joint Declaration, told The Standard newspaper that Thatcher "strived to find a balance for both Britain's and Hong Kong's interests".