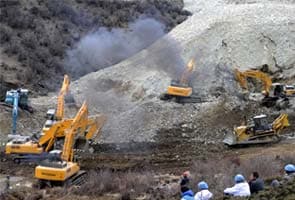 Beijing: A massive landslide swept through a gold mining area in mountainous Tibet early Friday morning, burying 83 workers believed to have been asleep at the time, Chinese state media said.

The official Xinhua News Agency said the workers in Lhasa's Maizhokunggar county worked for a subsidiary of the China National Gold Group Corp., a state-owned enterprise and the country's largest gold producer.

Xinhua said at least two of the buried workers were Tibetan. CCTV said most of the workers were believed to be ethnic Han Chinese.

The site is about 70 kilometers (45 miles) east of Lhasa, the regional capital.

More than 1,000 police, firefighters, soldiers and medics have been deployed to the site to conduct searches armed with devices to detect signs of life and accompanied by sniffer dogs, reports said. Around 30 excavators were also digging away at the site late Friday as temperatures fell to just below freezing.

The reports said the landslide was caused by a "natural disaster" but did not provide specifics. It was unclear why the first news reports of the landslide came out several hours after it occurred.

County officials reached by phone confirmed the landslide but had no further details, saying that information reaching the main office was limited due to poor cellphone coverage at the site. Calls to the company's general phone line rang unanswered.

Doctors reached at the local county hospital said they had been told to prepare to receive survivors but none had arrived. "We were ordered to make all efforts to receive the injured," said a doctor who gave only her surname, Ge, in the hospital's emergency section.

Ge said the hospital transferred some of its patients to other facilities to increase the number of beds available and that 16 doctors were on duty.

Promoted
Listen to the latest songs, only on JioSaavn.com
The Chinese government has been encouraging development of mining and other industries in long-isolated Tibet as a way to promote its economic growth and raise living standards. The region has abundant deposits of copper, chromium, bauxite and other precious minerals and metals and is one of fast-growing China's last frontiers.

But others worry that the rush into Tibet could wreck much of the high-altitude region's delicate ecosystem, and that an influx of the majority Han Chinese threatens its Buddhist culture and traditional way of life.
Comments
China landslide