Chinese Foreign Ministry spokesman Geng Shuang said today that some concrete suggestions have been made at the talks for expediting the solution. 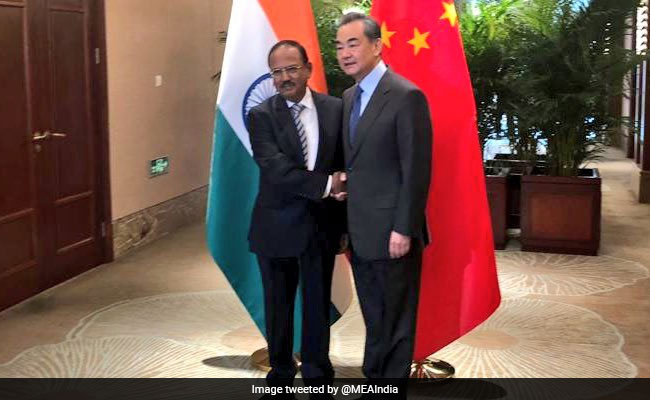 China and India made some "constructive, operable and forward looking" suggestions during the just concluded 21st round of border talks to move forward to achieve an early solution to the dispute and to maintain peace and tranquillity at the borders, the Chinese Foreign Ministry said today.

Chinese Foreign Ministry spokesman Geng Shuang told a media briefing today that some concrete suggestions have been made at the talks for expediting the solution.

"I want to highlight that the two sides on the issue of moving forward the border negotiations and on ensuring peace and stability and border cooperation, made some constructive, operable and forward looking suggestions. It can be said that in many areas the two sides share the common understanding," Mr Geng said.

The two sides agreed to authorise the bilateral Working Mechanism on Consultation and Coordination for Border Affairs, which periodically meets to deal with issues arising between the two militaries along the Line of Actual Control (LAC) to hold "early harvest consultations to work agreements, he said.

This was the first round of talks for Mr Wang, who is also the Foreign Minister, after he succeeded State Councillor Yang Jiechi earlier this year. Wang has become the state councillor, a rank higher than the foreign minister in the Chinese government's hierarchy.

Mr Geng said the meeting was held in a "very good atmosphere. The two sides had a good talk. The two sides reached many forward looking, operable and workable conclusions."

Replying to a question on plans by both sides to intensify efforts to find a solution to the border dispute, Geng said, "I want to emphasise that after the Wuhan summit between President Xi Jinping and Prime Minister Narendra Modi, the bilateral relations have made very positive progress and reached a new stage of development."

"Under the current international circumstances, the strategic importance of bilateral relations is more prominent. So the two sides will follow the guidance of the two state leaders' enhance strategic communication and political mutual trust," he said.

Official statements, issued by both sides at the end of talks last Saturday, spoke of advancing the dialogue process to find a solution the border issue.

A statement issued by the Indian Embassy said both sides resolved to "intensify" their efforts to achieve a "fair, reasonable and mutually acceptable" solution to the vexed boundary question at an early date.

A Chinese Foreign Ministry statement also said "both sides will continue to advance the negotiation process of the special representatives' mechanism; strive for an early settlement of the boundary question".