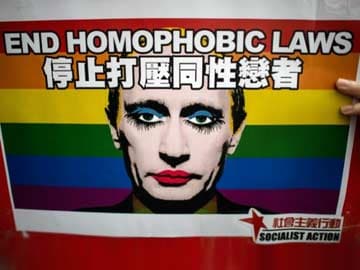 The six people held up a banner with the rainbow flag, the Olympic symbol and the words 'To Russia with love' as they kissed on a Beijing street.

Russia's adoption in June of a law prohibiting the dissemination of information about homosexuality to minors has sparked protests from human rights groups and calls for a boycott of the Sochi Winter Olympics, the country's first post-Soviet Games.

Promoted
Listen to the latest songs, only on JioSaavn.com
"We feel more positive today as it is Valentine's Day and we have the opportunity to relay the message that everybody has the right to love and the right to campaign," activist Xiao Tie told AFP.

Homosexuality was a crime in China until 1997 and then classed as a mental illness, with possible forced psychiatric treatment, for another four years.