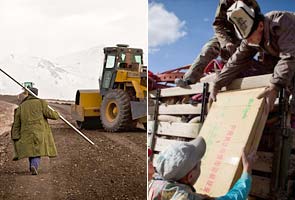 Murghab, Tajikistan: On the outskirts of this wind-scoured town, founded in 1893 as a Russian military post, the construction of a new customs compound heralds the return of another major power.

When it opens this year, the sprawling new lot will accommodate much larger caravans of Chinese trucks than the existing trade depot, speeding the flow of clothing, electronics and household appliances that have lately flooded Central Asia, from nomadic yurts on the Kyrgyz steppes to ancient alleyways in Samarkand and Bukhara.

"Trade is growing between China and all these countries around it," said Tu'er Hong, whose truck was one of about 50 from China transferring goods to Tajik drivers one day recently at the current post.

While China is seizing the spotlight in East and Southeast Asia with its widening economic footprint and muscular diplomacy, it is also quietly making its presence felt on its western flank, once primarily Russia's domain.

Chinese officials see Central Asia as a critical frontier for their nation's energy security, trade expansion, ethnic stability and military defense. State enterprises have reached deep into the region with energy pipelines, railroads and highways, while the government has recently opened Confucius Institutes to teach Mandarin in capitals across Central Asia.

Central Asia, says Gen. Liu Yazhou of the People's Liberation Army, is "the thickest piece of cake given to the modern Chinese by the heavens."


The five predominantly Muslim countries that won independence after the Soviet Union collapsed in 1991 -- Kazakhstan, Kyrgyzstan, Tajikistan, Turkmenistan and Uzbekistan -- are once again arenas for superpower rivalry, much as the region was during the 19th century Great Game between Russia and Britain. This time the players are China, Russia and the United States, which uses Central Asia as a conduit for troops to Afghanistan.

Chinese officials are wary of what they view as American efforts to surround China, seeing American troops and military alliances in Central Asia, India and Afghanistan as the western arc of a containment strategy that also relies on cooperation with nations in East and Southeast Asia.


China is flexing its own military muscle in the area, conducting sophisticated war games in Kazakhstan in September as part of annual exercises that traditionally include several Central Asian nations. According to a State Department cable released by WikiLeaks, American officials suspected China of offering Kyrgyzstan $3 billion to shut down the American air base there.

The cable, dated Feb. 13, 2009, described an awkward meeting between Tatiana C. Gfoeller, the American ambassador to Kyrgyzstan, and Zhang Yannian, the Chinese ambassador there, in which Ms. Gfoeller confronted Mr. Zhang with her suspicions of the $3 billion bribe. "Visibly flustered, Zhang temporarily lost the ability to speak Russian and began spluttering in Chinese to the silent aide diligently taking notes right behind him," the cable said. Mr. Zhang then rebutted the accusation.

But China's new presence in Central Asia is in many ways more Silk Road revival than Great Game redux. Chinese analysts say one goal of Beijing is to economically integrate Central Asia with the restive western region of Xinjiang, breaking down trade barriers, even if the Central Asian governments are wary.

"The growing economic footprint in Central Asia is pretty significant," said an American official who spoke on the condition of anonymity because he was not authorized to speak publicly about Chinese policy in the region. "In many ways, the investments are welcomed, not only by those countries, but also by the US But there's a lack of transparency in terms of China's investments and relations with those countries."

Local people are cautious too, especially in Kyrgyzstan and Kazakhstan, where they have long feared that Chinese migration could tip the balance of economic power in sparsely populated countries. In Almaty, Kazakhstan, a protest erupted last January against a proposed land deal involving China.

"Many of us Kazakhs are very suspicious of the Chinese influx in general, but what can we do?" said Aidelhan Onbedbayev, 35, a driver who shuttles merchants and travelers between Almaty and Zharkent, a border town. "The government makes these decisions and invites them in for investment with free-trade zones and land offers."

Some Chinese officials have been blunt about their interests.

"China's energy cooperation with Central Asian countries began in the 1990s, but in recent years, with the rapid growth of China's national strength, China took advantage of the lack of initiative in the region by the United States and Russia," General Liu wrote in an essay published last summer in the news magazine Phoenix Weekly. "China has begun stimulating feverish consumerism in the area."

The Central Asian nations bordering China, especially Kyrgyzstan, have become an important transit point for Chinese goods that make their way to the Caspian Sea region, Russia and Europe. Trade between China and the five Central Asian countries totaled $25.9 billion in 2009, up from $527 million in 1992, according to Commerce Ministry statistics.

Meanwhile, new pipelines are transporting oil and natural gas to Xinjiang from fields in Central Asia where Chinese companies have bought development rights. Chinese officials see Central Asia and the Caspian Sea as a crucial alternative source of energy; the Middle East is politically unstable, and tankers from there pass through the Strait of Malacca, which China fears could be closed by the United States military or other forces.

China also sees Central Asia as a foothold for maintaining stability in Xinjiang, where longstanding tensions between Muslim Uighurs and ethnic Han have exploded into deadly violence. Since ethnic rioting in 2009 in Xinjiang, Chinese officials have been especially wary of radical Islam filtering in from the Central Asian nations or Pakistan and Afghanistan, analysts say. About a half-million Uighurs live in the region, many of them immigrants from Xinjiang to Kazakhstan and Kyrgyzstan.

In 1966, China helped establish a precursor to the Shanghai Cooperation Organization, a regional strategy group aimed mainly at combating separatist unrest. The group's members, including Russia and most Central Asian countries, share intelligence and conduct joint military exercises, even if they often fail to coordinate larger policy because of competing interests, American officials say.

China also hopes to use the group to extend its economic influence. Last year, China granted $10 billion in loans to the Shanghai Cooperation Organization nations "to shore up the struggling economies."

Some Chinese officials and analysts hope such aid, along with strengthened commercial ties, will lead to economic growth in Xinjiang and less unrest among Uighurs. Central government officials submitted a proposal last year to the State Council, the Chinese cabinet, to transform Urumqi, the capital of Xinjiang and the site of the 2009 riots, into a regional energy production hub.

"China has always paid attention to these surrounding countries, promoting peaceful development in those countries in order to provide a good environment for China's economic growth," said Wu Hongwei, a Central Asia scholar at the Chinese Academy of Social Sciences.

China's growing thirst for oil and gas has made those a matter of strategic energy security. Two new pipelines, the first between China and foreign countries, supply it with gas from Turkmenistan and oil from Kazakhstan.

Promoted
Listen to the latest songs, only on JioSaavn.com
The pipelines were considered important enough that President Hu Jintao went to the Karakum Desert of Turkmenistan in 2009 to turn a symbolic wheel opening the 1,100-mile pipeline there.

That pipeline is expected to reach its full capacity of 40 billion cubic meters by 2012 or 2013, and Turkmenistan has been contracted to transport gas to China for 30 years. China wrangled the only license to develop the South Yolotan gas fields there, among the world's largest.