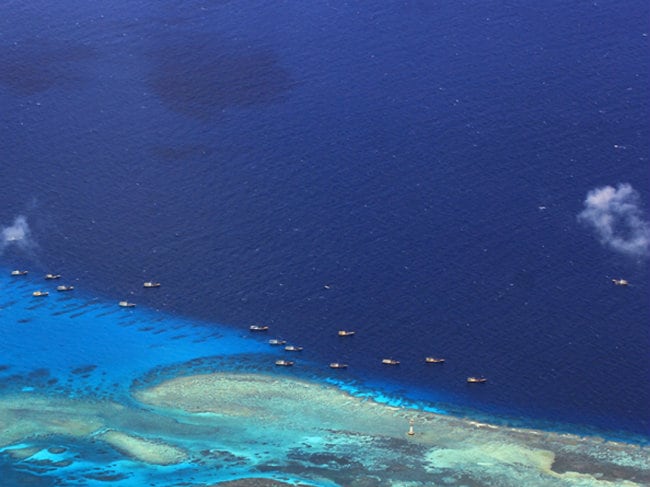 Washington, United States: Satellite images show China is building an island on a reef in the disputed Spratly Islands large enough to accommodate what could be its first offshore airstrip in the South China Sea, a leading defense publication said on Friday.

The construction has stoked concern that China may be converting disputed territory in the mineral-rich archipelago into military installations, adding to tensions waters also claimed by Taiwan, Malaysia, the Philippines, Vietnam and Brunei.

The building work flies in the face of U.S. calls for a freeze in provocative activity in the South China Sea, one of Asia's biggest security issues. Concern is growing about an escalation in disputes even as claimants work to establish a code of conduct to resolve them.

Dredgers were also creating a harbor to the east of the reef "that would appear to be large enough to receive tankers and major surface combatants," it said.

Asked about the report at a defense forum in Beijing on Saturday, Jin Zhirui, a colonel with the Chinese air force command, declined to confirm it but said China needed to build facilities in the South China Sea for strategic reasons.

"We need to go out, to make our contribution to regional and global peace," Jin said. "We need support like this, including radar and intelligence."

The land reclamation project was China's fourth in the Spratly Islands in the last 12 to 18 months and by far the largest, IHS Jane's said.

It said Fiery Cross Reef was home to a Chinese garrison and had a pier, air-defense guns, anti-frogmen defenses, communications equipment, and a greenhouse.

Beijing has rejected Washington's call for all parties to halt activity in the disputed waters to ease tension, saying it can build whatever its wants in the South China Sea.

Promoted
Listen to the latest songs, only on JioSaavn.com
Hong Kong media have reported that China plans to build an air base on Fiery Cross Reef. In August, the deputy head of the Chinese Foreign Ministry's Boundary and Ocean Affairs Departments said he was unaware of any such plans.