These detention camps are the backdrop to all Chinese government efforts to control the population in Xinjiang, said James Millward who has been tracking the plight of the Muslim minorities. 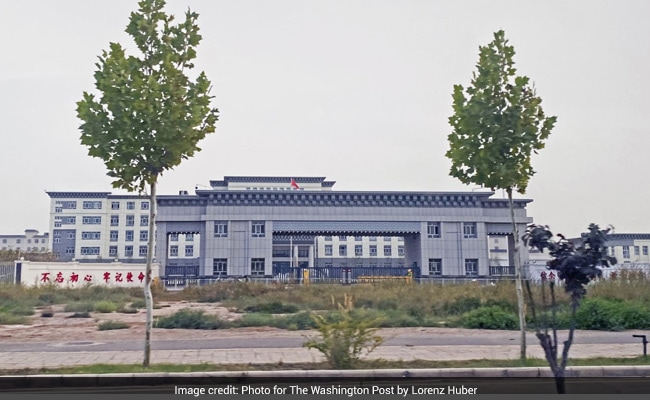 The gate of what is believed to be a new detention camp in Kashgar, China.

A huge Brutalist entrance gate, topped with the red national flag, stands before archetypal Chinese government buildings. There is no sign identifying the complex, only an inscription bearing an exhortation from Communist Party founding father Mao Zedong: "Stay true to our founding mission and aspirations."

But the 45-foot-high walls and guard towers indicate that this massive compound - next to a vocational training school and a logistics center south of Kashgar - is not just another bureaucratic outpost in western China, where authorities have waged sweeping campaigns of repression against the mostly Muslim Uighur minority.

It is a new detention camp spanning some 60 acres, opened as recently as January. With 13 five-story residential buildings, it can accommodate more than 10,000 people.

The Kashgar site is among dozens of prisonlike detention centers that Chinese authorities have built across the Xinjiang region, according to the Xinjiang Data Project, an initiative of the Australian Strategic Policy Institute (ASPI), despite Beijing's claims that it is winding down its internationally denounced effort to "reeducate" the Uighur population after deeming the campaign a success.

A recent visit to Xinjiang by The Washington Post and evidence compiled by ASPI, a Canberra-based think tank, suggest international pressure and outrage have done little to slow China's crackdown, which appears to be entering an ominous new phase.

For the past year, the Chinese government has said that almost all the people in its "vocational training program" in Xinjiang, ostensibly aimed at "deradicalizing" the region's mostly Muslim population, had "graduated" and been released into the community.

"This shows that the statements made by the government are patently false," said ASPI researcher Nathan Ruser, adding that there had merely been a "shift in style of detention." 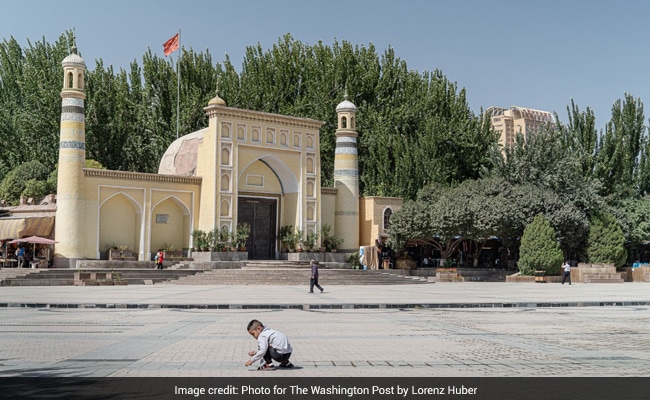 Chinese flag above the famous Idkah mosque in Kashgar.

The new compound, one of at least 60 facilities either built from scratch or expanded over the past year, has floodlights and five layers of tall barbed-wire fences in addition to the towering walls.

Satellite imagery reveals a tunnel for sending detainees from a processing center into the facility, and a large courtyard like those seen in other camps where detainees have been forced to pledge allegiance to the Chinese flag.

"This is a much more concerted effort to detain and physically remove people from society," Ruser said. "There aren't any sort of rehabilitative features in these higher-security detention centers. They seem to rather just be prisons by another name."

Some prison-style facilities like the one outside Kashgar are new. Other, existing sites have been expanded with higher-security areas. New buildings added to Xinjiang's largest camp, in Dabancheng, near Urumqi, last year stretched to almost a mile in length, Ruser said.

Some 14 facilities are still being built across Xinjiang, the satellite imagery shows.

These detention camps are the backdrop to all Chinese government efforts to control the population in Xinjiang, said James Millward, a professor of inter-societal history at Georgetown University who has been tracking the plight of the Uighurs.

"They exist as a threat," Millward said. "(The authorities) can go to people and say: We want you to move 600 miles and work in a factory, or your father better not object to this marriage that's been set up for you by the party committee, otherwise you'll be seen as an extremist." 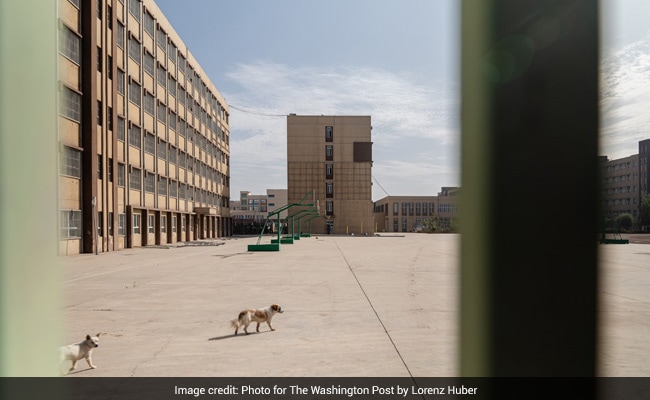 One of the former "re-education" centers in Kashgar, where Uighur Muslims were detained, now stands empty.

When a Post reporter tried to visit the detention center half an hour's drive south of Kashgar this month, her vehicle was quickly surrounded by at least eight cars that had previously been tailing at some distance. This site was clearly sensitive.

When The Post's reporter and two European journalists headed toward another new camp in Akto, south of Kashgar, they were stopped repeatedly, made to register their passports and drive behind police cars, only to be turned around at a county border. Coronavirus precautions were given as the reason.

Conversely, when they visited several compounds that previously held local Uighurs, authorities didn't bother much with trying to obstruct the reporters.

Those facilities appeared empty. Windows swung open at one former "vocational training" center. Bunk beds lay in piles in the yard at another. Litter rolled past ping-pong tables and over lonely soccer fields.

About eight camps appear to have been decommissioned, and 70 more, almost all of them lower-security facilities, have had their internal fencing or perimeter walls removed, according to ASPI's database. But there are no signs of soccer fields, factories or vocational facilities at the new compound south of Kashgar that would indicate a rehabilitative purpose.

Many Uighurs and people of other ethnic minority groups who have been sent to reeducation camps have subsequently disappeared into prisons. Mayila Yakufu, a Mandarin-speaking insurance company worker, was released this monthafter two years and three months of detention without trial. She had previously been put into a "vocational training" internment camp for 10 months.

When the scale of the human rights abuses in Xinjiang came to light in 2017 and 2018, China categorically denied their existence. But as satellite imagery and testimony from survivors and relatives became incontrovertible, and United Nations experts estimated that 1 million people or more had been incarcerated, Beijing tried to explain away the camps as a necessary program to deal with terrorists. 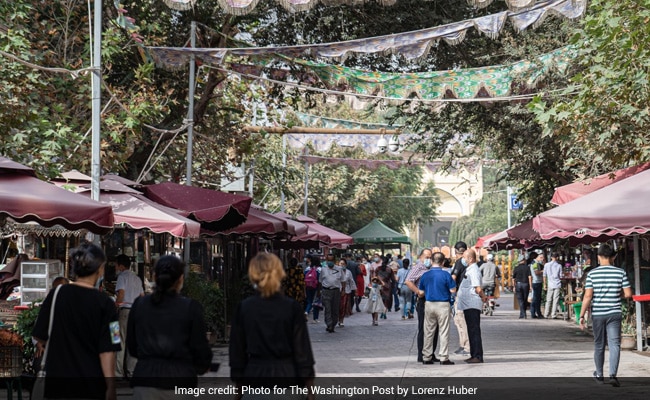 None of the men in this Muslim center of Kashgar's Old City have beards and none of the women wear hijab.

The region, which was conquered during the Qing dynasty in the 1700s and given a name meaning "new frontier" in Chinese, is home to Uighurs and other Turkic Muslims whose culture and language are distinct from that of China's dominant Han people.

For more than two centuries, people here have protested, sometimes violently, against Chinese repression. Some 200 people were killed in riots in the provincial capital, Urumqi, 11 years ago.

In recent years, under the leadership of Xi Jinping, Beijing has used these protests as a reason to carry out what many human rights advocates have labeled cultural genocide.

People who have been interned in the camps have described being forced to eat pork and drink alcohol; to renounce their religion and pledge allegiance to the Chinese Communist Party; and to undergo what they have described as systematic brainwashing. Women have been forcibly sterilized and the Uighur birthrate has plummeted.

Secretary of State Mike Pompeo has called China's treatment of Uighur Muslims the "stain of the century," and the administration is reportedly weighing a declaration of China's actions as genocide.

Xinjiang authorities did not respond to repeated requests for an interview about the development of the detention system.

But Xinjiang government chairman Shohrat Zakir, the top Uighur official in the party structure in the region, has said that the "reeducation camps" were needed to combat violent religious extremism and that the "graduates" now faced brighter futures.

In Beijing, Foreign Ministry spokeswoman Hua Chunying said this month that suggestions that China was persecuting Uighurs had been "concocted by some anti-China forces" and were "another farce designed to smear and discredit China." 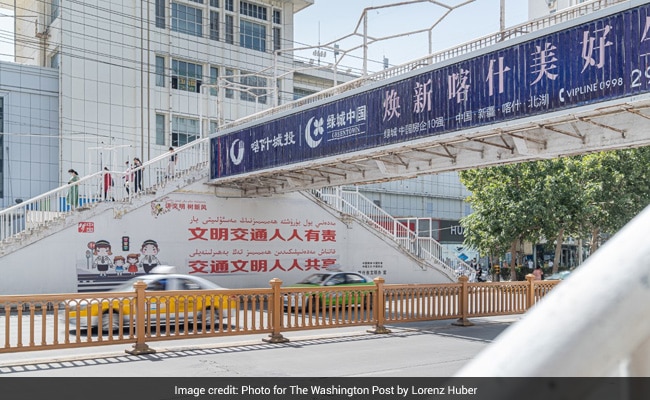 Almost all signs in Kashgar, the traditional capital of Uighur culture, are now written in Mandarin Chinese characters first, with the Uighur language relegated to second place.

The shift is part of a chilling new reality here in Kashgar, the traditional capital of Uighur culture, which has been under strict Communist Party controls for three years coinciding with the reeducation campaign.

With the population cowed, authorities recently appear to have let up a bit, secure in their control of Kashgar.

The "convenience" police stations that used to monitor movements at every major intersection have gone. Airport-style security checks at markets and in underpasses have largely disappeared, with only metal detectors in use.

Around Kashgar, Uighurs were palpably afraid to talk to foreign visitors, waving away reporters before they could ask questions.

The Old City, once an atmospheric oasis on the Silk Road, has been turned into a theme park for Han Chinese tourists, complete with light displays featuring Mandarin Chinese characters and kitschy settings that are perfect for selfies.

But closer observation reveals that none of the men in this Muslim city have beards and none of the women wear the hijab. The men chopping fruit and meat in the bazaar use knives that are chained to their stalls.

Many of the historic buildings remain, but an alarming number have padlocked doors and bear signs reading: "Empty house."

There are no working mosques - they have been turned into cafes or museums or closed entirely - and the landmark yellow-tiled Id Kah Mosque stands as a lonely monument to the reeducation campaign.

The Post reporter who visited the mosque on a day its doors were opened for tourists had to register her passport number to be allowed in and was then accompanied through the courtyard, empty but for banks of facial recognition cameras and the smell of bleach.

The prayer hall was locked; a guide told one reporter that prayers were at 6 a.m. and 2 p.m. - times that did not adhere to the Islamic schedule - and another reporter that they had been canceled because of the coronavirus.

Opposite the mosque, a large red banner in Chinese characters thanked President Xi for his loving care.