Thailand Cave Rescue: The speed with which an ongoing tragedy has been mined for intellectual property, as if it were an old Marvel comic book, might seem distasteful. But it isn't a particularly new phenomenon. 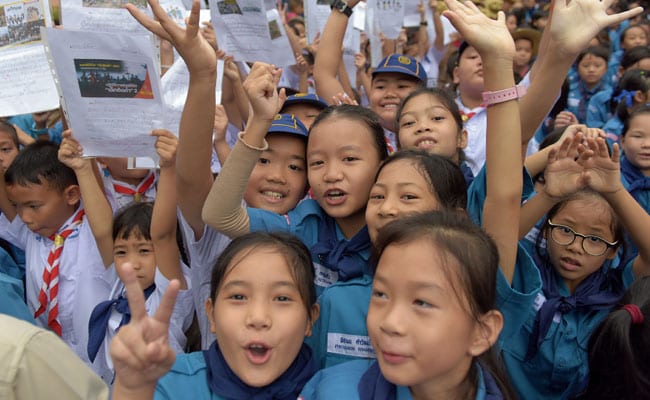 Thailand Rescue: Thai students smile as they hold pictures of 12 boys and a football coach (AFP)

The jokes, groans and eye-rolls started on Twitter even before the announcement - replete with tongue-in-cheek casting predictions.

"How soon is too soon to start boycotting the Hollywood movie of the Thai cave rescue starring Mark Wahlberg?"

"Cave rescue is going to make an incredible movie, can't wait to see Scarlett Johansson inspire in her role as 12 Thai boys."

Then, on Wednesday, it was actually announced. The story that captivated the world about a boys soccer team and their coach being trapped in a cave in Thailand is going to be a major motion picture. Pure Flix Entertainment, the Christian film studio known for the "God's Not Dead" series, will produce it.

The announcement came the same day the last boy was rescued. The inevitable pushback was immediate, with writer and director Larry Charles tweeting:

"The Thai cave rescue reminds me of a post modern version of Billy Wilder's Ace in the Hole. You've got Elon Musk grabbing attention with shameless self-promoting, trying to shill a new product AND a movie of the saga being announced before the kids are out of the hospital."

The Thai cave rescue reminds me of a post modern version of Billy Wilder's Ace in the Hole. You've got Elon Musk grabbing attention with shameless self-promoting, trying to shill a new product AND a movie of the saga being announced before the kids are out of the hospital.

The speed with which an ongoing tragedy has been mined for intellectual property, as if it were an old Marvel comic book, might seem distasteful. But it isn't a particularly new phenomenon.

One of the most striking recent examples is "Zero Dark Thirty," Kathryn Bigelow's dramatization of United States government's hunt for and eventual killing of al-Qaida leader Osama bin Laden. U.S. forces killed bin Laden on May 2, 2011, in what President Barack Obama called "the most significant achievement to date in our nation's effort to defeat al-Qaida." The movie hit theaters in December 2012, barely a year and a half later.

That's a remarkable turnaround time. Bigelow, though, was no stranger to tackling fresh issues. She won six Oscars, including best director and best picture, for her 2008 movie "The Hurt Locker," which followed a U.S. bomb disposal team during the Iraq War. Though the movie was based on accounts of a journalist embedded in Iraq in 2004, it came out while the Iraq War was still underway.

First came "Patriots Day" in 2016. The Peter Berg movie depicts Mark Wahlberg as Boston Police Sgt. Tommy Saunders as he searches for the bombers in the attack's immediate aftermath.

Though movies based on recent tragedies are often subject to backlash, the reaction to "Patriots Day" was particularly fierce - especially in the Boston area. The movie, wrote Boston film critic Sean Burns, was "as disgraceful an exploitation of real-life tragedy as I've ever seen. Everyone involved in this movie should be ashamed of themselves."

A year later, "Stronger" hit theaters. Rather than focus on the police response, the David Gordon Green told the story of Jeff Bauman (played by Jake Gyllenhaal), a man who lost his legs in the bombing and was the subject of a famous photo from the day.

This one was much more warmly received, perhaps because it was based on Bauman's memoir. It "rises on the power of its well-chosen ensemble to offer an emotionally resonant fact-based story that transcends inspirational drama cliches," reads the critical consensus on Rotten Tomatoes, where it earned a 92 percent "fresh" rating.

The September 11, 2001, terrorist attack on the United States was, by far, the country's deadliest. Perhaps due to this wretched gravity, Hollywood waited a bit longer to cash in on the horror. But cash in it did, with a pair of back-to-back movies. "United 93″ and "World Trade Center" were both released in 2006, within four months of each other.

The first came in April, and as the title suggests, told the story of United 93 - the hijacked plane heading toward Washington, D.C., that crashed in Pennsylvania after its passengers attacked the hijackers. Paul Greengrass' account was met warmly by critics, but those connected to the actual event weren't as pleased.

"It was both excruciating and beautiful at the same time," Alice Hoagland, whose son was on the flight, told the San Francisco Chronicle. After Marjorie Kase, who lost three friends in the 9/11 attacks, unexpectedly saw a trailer, she echoed others in telling the paper, "I don't think the country is ready for this movie right now. We don't have enough perspective or hindsight on the matter."

Just as "United 93″ was coming out on DVD months later, Oliver Stone's account of first responders was hitting theaters amid far more mixed reviews - many of which deemed it exploitative.

With each release, it seems, those directly affected by attacks are forced to relieve the horrid day. Bill Doyle, whose son was killed in the Twin Towers, was particularly angry after seeing advertisements for 2012's "Extremely Loud & Incredibly Close," the Tom Hanks vehicle based on a Jonathan Safran Foer novel.

"Everybody's trying to make money off 9/11," he told the New York Post. "A lot of families got upset. Why couldn't they warn us about this? I don't think people really realized that these people are really still stressed."

A year after Chris Kyle -- the deadliest marksman in United States history who had 255 confirmed kills during four tours in Iraq -- died in 2013, the Oscar-winning, Clint Eastwood-helmed depiction of his life (and death) titled "American Sniper" hit theaters.

The timeline also tends to be even shorter when it comes to the made-for-TV movies. Consider this: In May 1993, Tim Daly portrayed David Koresh in a small screen flick about the standoff between the police and the Branch Davidians - which occurred less than a month earlier.