Karl Lagerfeld was once told by Queen Elizabeth II, after she had seen one of his shows with its elaborate set and extravagant flowers, that it was "like walking in a painting," a description that he said he never forgot. 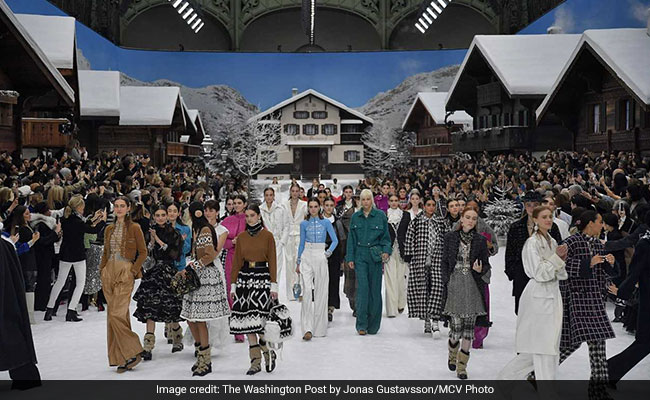 A wintery alpine village created within the Grand Palais, the set for Chanel fall-winter 2019 collection.

There were no grand gestures at Karl Lagerfeld's final Chanel ready-to-wear show - the last one that he worked on before his death last month.

Wind chimes gently tinkled through the Grand Palais, which was transformed into a snowy mountain retreat with wooden cabins, white smoke spiraling from chimneys, elegant pine trees and mounds of faux snow. After a minute of silence from the hundreds of guests - when not even a camera shutter clicked - a recording of Lagerfeld's voice echoed across the room as he ruminated on Chanel having been reborn as a fashion object of so many desires. He was once told by Queen Elizabeth II, after she had seen one of his shows with its elaborate set and extravagant flowers, that it was "like walking in a painting," a description that he said he never forgot.

Then the music came to life, and the models emerged to play their role in Lagerfeld's final masterstrokes. His last painting was a thing of beauty.

Oversized tweed jackets were paired with roomy trousers, knit dresses had the kick and charm of an old-fashioned ice skating costume and white "snowball" dresses were constructed with a fitted bodice and a fluffy poof of a skirt. The models kicked up the faux snow with their furry winter boots, and shearling-trimmed Chanel fanny bags hugged their waist. 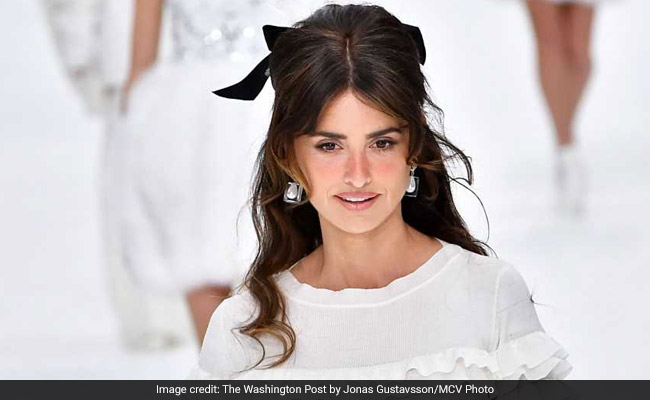 There were fewer looks than is usual for a Chanel show - or at least it seemed that way. One didn't have the feeling of being bombarded with a blizzard of ideas, some splendid and others landing with a bit of a thud. There was no excess this time. It was only the best.

The show was a fine reminder of how good Lagerfeld could be, just how well he could take a theme and tease out myriad grace notes. He could cut a rough diamond into countless sparkling gems.

An incredible career of a flawed and talented man had come to an end. But the story of Chanel will continue. That's the nature of this business and that's the rhythm of life. We are all bit players in a sweeping dramedy, and if we are lucky and tenacious, we make the most of our limited roles and manage not to leave too much of a mess in our wake.

Lagerfeld filled his role to the fullest and extended his reach well beyond its boundaries. The brand's founder, Gabrielle "Coco" Chanel, wrote part one of this fashion success story, but Lagerfeld may well have written parts two and three. He gave the house new life as a fashion company, and then he extended its notoriety deep into popular culture until it has become emblematic of what the world imagines a fancy French fashion house to be. Today, designer anoraks and track pants, sulking hipsters and gorgeous eccentrics are part of the fashion universe here. But when people come to Paris to take in a bit of fashion, Chanel is the touchstone to which everything else is compared. It is the default.

The street outside the Grand Palais was thick with rabid Chanel fans and Karl enthusiasts, tourists who were thrilled to have stumbled onto a moment of fashion history, photographers hoping to catch a shot of the celebrities in attendance, like Penelope Cruz, who walked in the show. And, of course, there were young people who sensed a happening and stood with cameras aloft and ready to document it. This is the Chanel that Lagerfeld built. 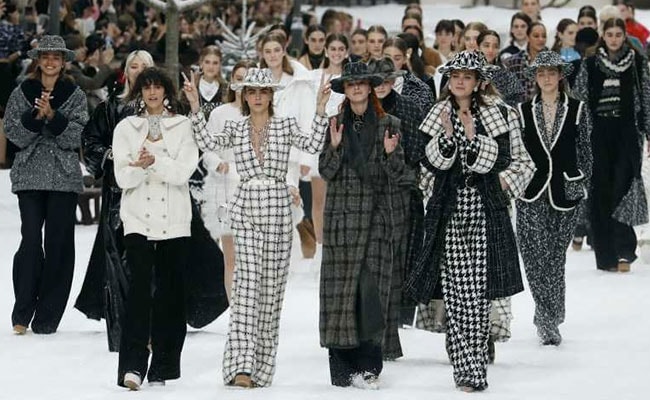 The models kicked up the faux snow with their furry winter boots, and shearling-trimmed Chanel fanny bags hugged their waist.

Inside, editors, retailers, clients and friends of the house were waiting for something big and emotional to happen. As always, the customers came in their full Chanel kit: the tweed coats and pearls, the T-shirts, bags, shoes and perfume - and with the enduring belief that because they were wearing Chanel, they were part of something larger. They were part of something glamorous and sophisticated that crossed international borders and connected them to movie stars and royalty. Chanel is their golden ticket past the velvet rope and up the stairs into the VIP box of life.

Everyone waited for that big in memoriam gesture for Lagerfeld, something to imprint this day on their memories. In the end, the models made one final march through the snow. And when they disappeared backstage, all eyes turned to the top of the runway. People applauded and waited. That moment when Lagerfeld would have emerged with an expression of pleasant satisfaction, dressed in a black jacket and trousers, his white hair swept into a ponytail, came and went. The stage remained empty.

From the interviews Lagerfeld gave and the bon mots he batted around in conversations, the designer understood that he was only part of a larger Chanel story that was forever moving on to the next plot line. His death was not the end. It was a pause before another page is inevitably turned.