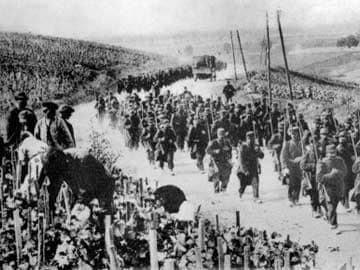 Picture of a post card released by the Historial de Péronne, Museum of WW1, shows Poilus, French World War I infantrymen, walking to the front as peasants look on, in 1914 at the beginning of the First World War

Berlin: Widely eclipsed by the horror of the Nazi era, World War I seems to have found its way back into the minds of many Germans with a slew of new books ahead of the centenary of the war's outbreak.

Chancellor Angela Merkel commented recently that the 1914-18 war featured more prominently in the collective memories of Britons or the French - both countries refer to it as the "Great War" - than in Germany.

Unlike other European countries, Germany, which was defeated in the war, has no national commemorative event planned this year to mark 100 years since the August start of the conflict.

However, Merkel on Wednesday is due to inaugurate an exhibition on the war, which overall claimed the lives of 10 million soldiers and left 20 million more wounded along with millions of civilian casualties, at the German Historical Museum in Berlin.

She will also join German youngsters for a discussion.

"Given the horror of the Second World War where the guilt of course strongly lies with Germany and we take responsibility for the terror of National Socialism, we haven't in Germany had the First World War so much in mind.

"Nevertheless, this year is therefore especially important," she said in her weekly podcast on Saturday.

The chancellor is scheduled to go to Ypres, the Belgian town forever linked with the bloodiest trench warfare of the conflict, on October 28 at the invitation of the Belgian king.

And German President Joachim Gauck and his French counterpart Francois Hollande will commemorate the victims of World War I together on August 3 in eastern France.

But the absence of a big official commemoration in Germany does not seem to have prevented a recent spike in curiosity about this chapter in the country's history.

"Nearly every specialist publishing house in Germany released in the autumn a title on the First World War.

"The media is largely reflecting this and the interest from readers is very big," a spokeswoman for the Federation of German Publishers and Booksellers, Claudia Paul, told AFP.

'Free of accusations of guilt'

One indication of Germans' interest has been the success of the best-seller "The Sleepwalkers" by Australian Christopher Clark.

The British-based historian re-evaluates the eve of WWI, focusing on how clueless the leaders of Europe's great powers were about the carnage of the first industrialised war that would follow.

"We have sold 200,000 copies and we are on the 12th new edition," Meike Boehn, of Germany's DVA publishers said, underlining such figures were very unusual for this kind of book.

Among those to have read it is Merkel.

Experts and critics put the German success of the nearly 900-page title down to the book's premise that Germany and the Austro-Hungarian Empire didn't play any greater role than other countries in starting the war.

"The success of this book in Germany betrays a deeply rooted need to be free from accusations of guilt," the Frankfurter Allgemeine Zeitung daily commented.

"People are delighted," he said, sarcastically. "Among German intellectuals there was the conviction that everything led us to Hitler.

"Clark liberates us from all that by saying to us 'you're not more aggressive than the others'," he said.

Back in the 1960s, a book by Hamburg University professor Fritz Fischer entitled "Germany's Aims in the First World War" sparked controversy by arguing that, on the contrary, Germany pushed for war from July 1914 in a bid to become a world power.

After the 50th anniversary of WWI in 1964, interest however in what is termed in Germany the "Urkatastrophe", or original disaster, dropped off.

An absence of WWI battlefields on German soil as well as there being very few commemorative monuments to soldiers killed during 1914-18 have probably contributed to the lack of interest.

But the historian Krumeich noted that people had now started to want to "know where their ancestors lie".

Promoted
Listen to the latest songs, only on JioSaavn.com
And his Humboldt University colleague Herfried Muenkler, author of "The Great War: The World 1914 to 1918", said he had also noticed a growing curiosity among Germans.

"People discover uniforms or military insignia in their attics. After conferences, they come to ask me where they're from," he said.