Former Catalan government spokesman Jordi Turull obtained 64 votes in favour and 65 against, prolonging the deadlock in the wealthy Spanish region. 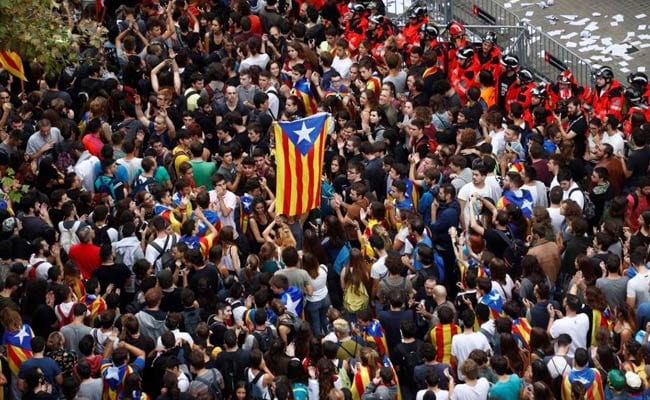 Barcelona, Spain: Catalan separatist parties failed to elect a new regional president on Thursday after their most radical faction refused to back the proposed candidate in a vote of confidence.

There were four abstentions from the far-left CUP party.

The vote triggers a two month deadline for Catalonia to install a new regional government before fresh Catalan elections must be held.

Turull, the only candidate, is not even guaranteed a win in a second round scheduled for Saturday, where he would require a simple majority from the 135-seat Catalan parliament to be elected.

As if this wasn't enough, it's uncertain whether the former Catalan government spokesman will even be able to attend the second session as he has been summoned before a Supreme Court judge on Friday along with five other separatist leaders.

The judge is due to notify them of the charges brought against them for their role in the Catalan independence drive, and may even remand some of them in custody pending a trial.

- 'So much indecision' -
With this in mind, Turull did not mention the word "independence" during his speech to the Catalan parliament even though the CUP demanded a greater commitment to the separatist cause if he wants their support.

Instead he appealed for dialogue with Spanish's central government.

"We ask to sit at the same table to resolve politically the problems we face," he said.

Just minutes before the parliamentary session kicked off to appoint Turull the CUP, which with its four lawmakers plays a kingmaker's role in the pro-independence camp, said it refused to back his bid arguing that his proposed programme did not press hard enough for independence.

"The time has come to say no to so many calculations, to so much indecision, to so many delays," said the tiny party's parliamentary spokesman, Carles Riera.

Catalan parliament speaker Roger Torrent called the express parliamentary session on Thursday, faced with what he dubbed the "interference" of the Supreme Court.

Had Turull managed to be sworn in, he would have gone before the judge on Friday as Catalonia's new president-elect and jailing him would take on a greater gravity.

As such, Spanish media have dubbed him the separatists' "plan C."

"You don't want to govern, you want to prolong the chaos," Ines Arrimadas, Ciudadanos's chief in Catalonia, said during the debate in parliament.

Spain's Justice Minister Rafael Catala accused the separatists of seeking "a clash with the rule of law, with institutions."

Speaking on Spanish radio, Catala said that calling the session to appoint a candidate under investigation "shows there is no real desire to find solutions for the future, but only to continue muddying the playing field."

Separatist parties won regional elections in December called by Madrid after they attempted to secede, retaining their absolute majority in parliament.

But they have still not been able to form a government as their two previous candidates for the presidency proved problematic.

Puigdemont went into self-exile in Belgium after separatist lawmakers declared independence last October and Sanchez is in jail pending the probe into the secession drive.

As long has it does not have a government, Catalonia will remain under direct rule from Madrid, imposed after the independence declaration.
Comments
CataloniaSpain