Caribbean Corals Could Vanish Over Next 20 Years: Report 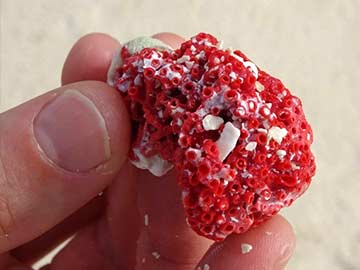 Just a sixth of the original coral cover exists today in the region, which is home to nine percent of the world's coral reefs. (Representational Image)

Geneva: Caribbean coral reefs could disappear within 20 years as overfishing has all but wiped out the fish that feast on coral-smothering algae, the UN and an international conservation watchdog warned on Wednesday.

Just a sixth of the original coral cover exists today in the region, which is home to nine percent of the world's coral reefs, according to study by the International Union for Conservation of Nature (IUCN) and the UN's environment agency.

The report warned that "Caribbean coral reefs have suffered massive losses of corals since the early 1980s due to a wide range of human impacts" such as overfishing, pollution and global warming.

In the past 40 years alone, 50 Caribbean reefs have been wiped out, the study showed, adding that "most Caribbean coral reefs may disappear in the next 20 years".

"The rate at which Caribbean corals have been declining is truly alarming," said Carl Gustaf Lundin, who heads the IUCN's Global Marine and Polar Programme.

Climate change, which makes oceans more acidic and causes coral bleaching, has long been thought to be the main culprit behind the decline of coral reefs - considered among the most diverse ecosystems on the planet.

But the study found the loss of parrotfish and sea urchin - the area's main "grazers" - was by far the biggest driver of coral decline.

The two species feed on algae, which when left unchecked smothers the reefs, the report said.

An unidentified disease killed off most sea urchin in 1983, while intensive fishing throughout the 20th century has pushed the parrotfish population close to extinction in some areas.

"The loss of these species breaks the delicate balance of coral ecosystems," the experts found.

Jeremy Jackson, the report's lead author and IUCN's senior advisor on coral reefs, said that even if climate change were to stop, "these reefs would continue their decline".

But Lundin told AFP there was still time to reverse the devastating trend.

"The fate of Caribbean corals is not beyond our control and there are some very concrete steps that we can take to help them recover," he said.

The 38 countries that border the reefs must fight overfishing, prevent fishermen coming too near the coast and cut the use of fish traps, Lundin said.

In addition, countries need to implement better zoning laws -- blocking the construction of tourist hotels too close to the shore -- and better manage their waste water, he added.

The report showed that some of the healthiest Caribbean coral reefs are those with large populations of grazing parrotfish, including the US Flower Garden Banks National Marine Sanctuary in the northern Gulf of Mexico, Bermuda and Bonaire.

Promoted
Listen to the latest songs, only on JioSaavn.com
These areas restrict or ban fishing harmful to parrotfish, the report said, hailing plans in Barbuda and elsewhere to follow suit.

But areas where parrotfish are not protected, including Jamaica, the Florida Reef Tract and the US Virgin Islands, "have suffered tragic declines," it concluded.