Canadian Prime Minister Justin Trudeau arrived at an Ottawa pharmacy with his wife Sophie, and told the masked woman giving out the Covid vaccine shots there that he was eager to receive it. 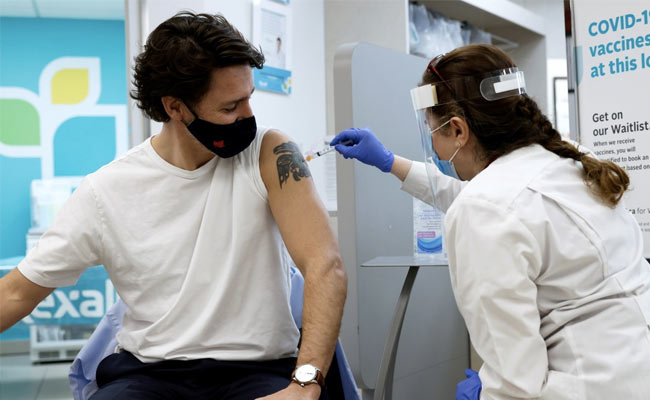 Canadian Prime Minister Justin Trudeau got the vaccine shot at an Ottawa pharmacy.

Prime Minister Justin Trudeau received a first dose of the AstraZeneca Covid vaccine on Friday, seeking to reassure Canadians it is safe despite very rare but serious blood clots in a handful of cases among millions vaccinated.

The Canadian leader arrived at an Ottawa pharmacy with his wife Sophie, took off his shirt in front of cameras, and told the masked woman giving out jabs that he was eager to receive it.

Each of Canada's 10 provinces is responsible for rollouts of vaccines procured by the federal government. Most recommend the AstraZeneca vaccine for people aged 40-45 years, but on Friday a government health advisory board said people as young as 30 could safely take it.

"As Ontario has invited people 40 and over to receive the AstraZeneca vaccine in pharmacies, it is now our turn," Trudeau, 49, earlier told a news conference.

His wife Sophie contracted the novel coronavirus in March 2020, forcing the prime minister to self-isolate at the time in his Ottawa residence.

"It is a relief to know that this simple gesture helps to protect oneself, but especially to protect those we love around us," Trudeau said on Friday.

"So, if it is also your turn, I invite you to make an appointment as soon as possible," he added.

The Canadian leader also reiterated Thursday evening on Twitter: "The best vaccine for you is the first one offered to you."

Just over 1.1 million doses of AstraZeneca's vaccine, one of four approved for use in Canada, have been administered in this country.

Only four cases of blood clots associated with low platelets have been reported in Canada in people who received it, but all have recovered, according to Health Canada.

Distrust of the AstraZeneca vaccine has led many countries to set age limits for its use, or even to suspend its use.