Officially, the Canadian authorities recognize 14 cases of the unexplained affliction, with the last recorded in December 2018. 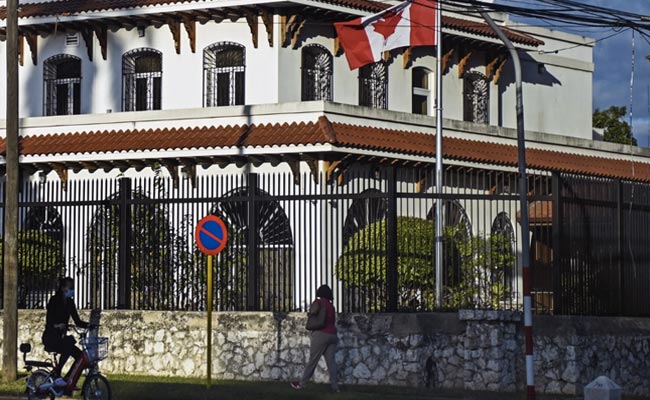 After job postings to Cuba, they complained of violent headaches, visual troubles and nausea -- nearly 20 Canadian diplomats claim their government failed them and others they say are falling victim to the mysterious "Havana Syndrome" to this day.

Officially, the Canadian authorities recognize 14 cases of the unexplained affliction, with the last recorded in December 2018.

But the stricken diplomats, who are suing the government in Ottawa for taking too long to evacuate them and provide them with treatment, say the number is closer to 30, and rising.

A source close to the case told AFP there were two reports just this year of diplomats forced to end their tours of duty in Havana earlier than scheduled after experiencing symptoms.

Still unexplained, cases of the puzzling affliction dubbed "Havana Syndrome" in the media made their first appearance in Cuba in 2016.

Diplomats from the United States and Canada, some of whom claimed to have heard very high-pitched sounds around the onset of their symptoms, started complaining of migraines, vertigo and nausea.

In some, brain lesions were diagnosed.

Later, cases were also reported among diplomats in China, Germany, Australia, Russia, Australia and even Washington.

A former Canadian envoy, who lived in Cuba for four years, recounted waking up one morning in 2017 suffering from vertigo and "bad nose bleeds."

"I hadn't had a nose bleed since I was a child," she told AFP on condition of anonymity. The symptoms worsened, she said, and "I realized I was not able to carry on working at that time so that's when I left."

Another said she started "feeling weird vibrations in my ears around the same time every night" just weeks after arriving in Havana in 2017, and noticed a deterioration of her formerly perfect eyesight.

"I've never had glasses, never had any visual problems whatsoever and since Cuba I now have to wear green tinted glasses as much as possible, and even then my eyes are blurry at times," she said.

Several hypotheses have been put forward to explain the symptoms -- from electronic weapons possibly wielded by a US rival such as Russia, to collective hysteria induced by stress or the effects of insecticides.

There has been no definitive conclusion, and Cuban authorities deny the existence of such a syndrome.

In September, a 16-member expert panel convened by the communist government brought out a report saying the claims were not "scientifically acceptable."

It said "neither the Cuban police, nor the FBI, nor the Royal Canadian Mounted Police have discovered evidence of 'attacks' on diplomats in Havana despite intense investigations."

In Washington, the case is far from closed.

Earlier this month, Secretary of State Antony Blinken pledged to "get to the bottom" of the matter and appointed two veteran envoys to coordinate a response and ensure anyone reporting symptoms received the appropriate medical care.

Afflicted Canadian diplomats say their complaints have not been treated with the same level of urgency.

"I think our biggest complaint is that we weren't offered any kind of help," said one.

Another, who said she was instructed not to speak about her health concerns to anyone, not even medical personnel, said: "I think Canada was very reluctant to say: 'Yes our diplomats... are affected'. I think they prioritized the relationship with Cuba over their own people."

While Cuba's relations with the United States are notoriously tense, apart from a brief period of detente between 2014 and 2016, the island's ties with Canada are warm.

Ottawa has never broken off ties since the revolution led by Fidel Castro in 1959, and is historically the main source of tourists to the island.

Miller agreed the treatment of American and Canadian presumed victims was "very different."

"Here (in Ottawa), the government said: 'We're gonna do everything to take care of our diplomats.' They haven't."

In a written response to AFP, the Canadian foreign ministry said it "takes the health, safety and security of Canadians very seriously" and "continues to monitor the health and safety of its diplomatic staff stationed in Havana."

In January 2019, Canada announced it had reduced its staffing at the embassy to about half as a result of the unexplained symptoms, but has since started upping numbers and expects to return to a full staff complement soon.