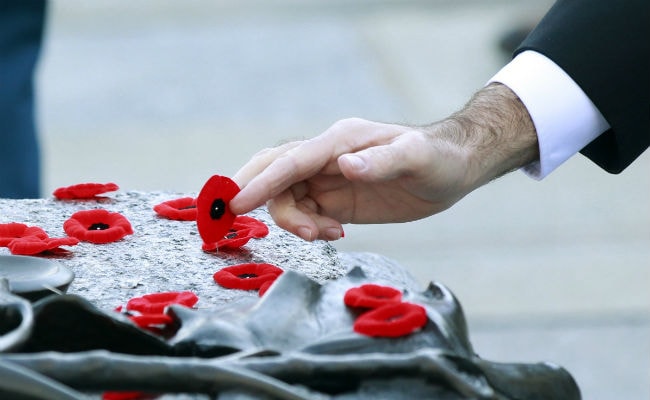 A member of the Canadian Forces lays a poppy on the Tomb of the Unknown Soldier.(Reuters)

Ottawa: Thousands gathered for Remembrance Day ceremonies at Canada's war memorial on Tuesday, the same site where a soldier was shot dead three weeks ago in an attack on parliament.

The annual November 11 Remembrance Day honoring Canada's war dead took on increased significance this year after two soldiers were killed in separate attacks in October that police said were carried out by radical recent converts to Islam.

The crowd, an estimated 50,000, was bigger than usual at Ottawa's cenotaph and security was tight at an event attended by Prime Minister Stephen Harper. The prime minister cut short a trip to the Asia Pacific Economic Cooperation (APEC) bloc summit in China to participate in Tuesday's ceremony.
In a statement, Harper said the recent attacks on the two soldiers "who were targeted simply because they proudly wore this uniform, only strengthens Canada's resolve to keep fighting against those who would deny our liberties and freedoms."

On Oct. 22, Corporal Nathan Cirillo, 24, was standing an unarmed, ceremonial watch at the war memorial when he was shot by a man who then ran into the Parliament building, exchanging fire with security officers before he was killed.

Two days before the shooting in Ottawa, the capital, Warrant Officer Patrice Vincent was killed when a man ran over him and a fellow soldier with his car near Montreal.

As bagpipes from Cirillo's Argyll and Sutherland Highlanders regiment played a funeral salute, Harper and military officials and veterans laid wreathes at the cenotaph's base. Four members of Canada's armed forces and police, heads bowed, stood at each corner of the memorial.

"What was till now a vivid symbol of the precious blood spilled to preserve our freedom is now and forever a place where real blood was spilled," said Rabbi Reuven Balka, an honorary chaplain with the Canadian military. "We are shaken to the core, but shaken toward firm resolve ... from apathy toward actively promoting our sacred values."

The attacks were carried out as Canada's military joined air strikes against Islamic State militants in Iraq. On Tuesday, the defense department said Canadian jets hit more Islamic State targets in Iraq. Two Canadian operating bases in Kuwait and Iraq were named after the slain soldiers.

Promoted
Listen to the latest songs, only on JioSaavn.com
The twin events prompted debate over whether Canada's parliament needs stronger security. Heavily armed police patrolled through the crowds on Tuesday.