Cairo bomb attack as referendum gets under way: police 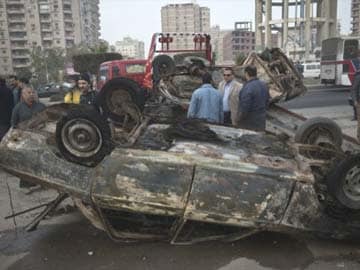 Burnt out cars are removed after being set on fire by Muslim Brotherhood supporters of ousted Egyptian president Mohamed Morsi during clashes with police in Nasr city district, in Cairo, on January 8, 2014

Cairo: A bomb exploded outside a Cairo court on Tuesday just before polling stations were to open for a constitutional referendum boycotted by supporters of ousted president Mohamed Morsi, police said.

The small, improvised bomb damaged the facade of the court house but caused no injuries, a police general said.

It was the latest in a spate of such attacks since the military overthrew the Islamist Morsi in July, and occurred as hundreds of thousands of soldiers and police deployed across the country to guard polling stations for the two-day vote.

Promoted
Listen to the latest songs, only on JioSaavn.com
The military-installed interim government bills the referendum on Tuesday and Wednesday as the first of several polls it says will restore elected rule by the end of the year.

The government hopes for a large turnout to approve the constitution, to shore up its disputed authority after a brutal crackdown on Morsi's supporters following his overthrow.