He Runs For President Of South Sudan By Day. At Night, He Unloads Trucks

Deng pursues the presidency of the world's newest and perhaps most desperate country with infectious passion and an unlikely band of volunteers. 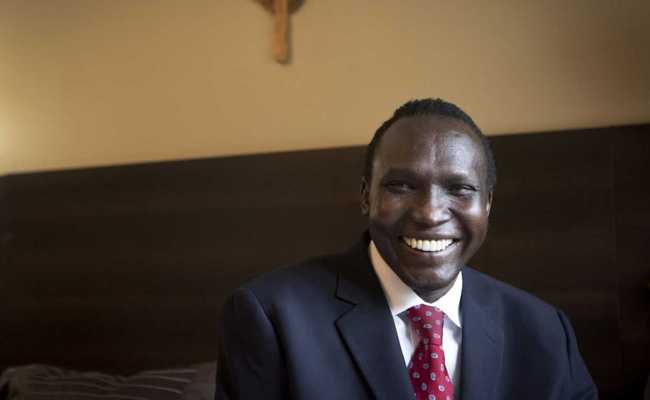 "Africa does not want rulers. It wants leaders," says Deng, a U.S. citizen in his late 30s.

He's at the back of the suburban Richmond, Virginia, store, unloading a 54-foot truck crammed with leaf blowers and barbecue grills, Drano and pitchforks - tough work that drives off most in a matter of weeks or months. Deng has stuck with it for six years because he likes having his days free for his other gig: running for president of South Sudan.

Virginia prides itself on being the "mother" of presidents. Eight U.S. heads of state were born there, more than in any other state. That's not counting Joseph Jenkins Roberts, the Petersburg barber who became the first elected president of Liberia in 1847.

With Deng - an adopted son of Virginia who arrived as a Sudanese refugee two decades ago, just ahead of a wave known as the "Lost Boys" of Sudan - the commonwealth might someday claim one more.

"Africa does not want rulers. It wants leaders," said Deng, a U.S. citizen in his late 30s who does not know his precise age. "I'm a leader because I trained in America."

Deng pursues the presidency of the world's newest and perhaps most desperate country with infectious passion and an unlikely band of volunteers.

A former Richmond TV anchor who has never been to Africa acts as an adviser. A grass-roots Republican activist, more practiced in Virginia legislative races than international affairs, serves as political strategist and occasional stylist, picking up a woolen Costco overcoat for Deng ahead of a meeting at the United Nations in December.

A month before that, Deng pressed State Department officials to call for elections in his war-ravaged homeland - something the cowboy-hatted President Salva Kiir has refused to do.

A fellow refugee who advises Deng on security deemed a campaign trip to their homeland too risky. So in May, Deng traveled instead to Uganda, Kenya and Ethiopia, where he promised crowds of displaced South Sudanese that he would usher in an era of democracy and honesty.

For the most part, Deng makes his bid from Virginia, where he still lives with the family who took him in. His $15 hourly wage is enough to pay his bills and bankroll a shoestring campaign that relies largely on social media and free help from Andrea McDaniel, a longtime NBC12 anchor who met Deng at a charity event, and Don Blake, president of the Virginia Christian Alliance, who encountered Deng through church. 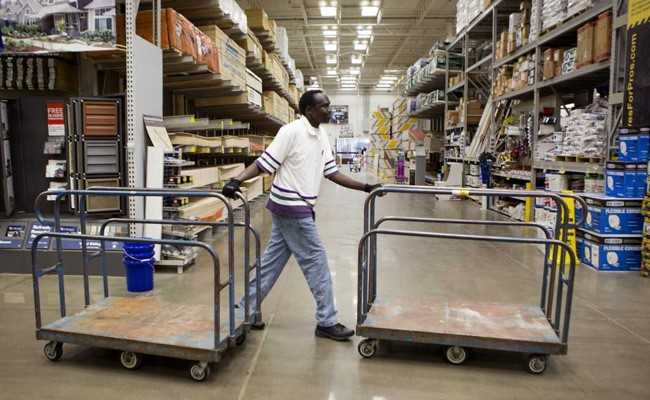 Bol Gai Deng earns $15 an hour at Lowe's, enough to pay his bills and bankroll a shoestring campaign that relies largely on social media and free help from a former local TV anchor and the head of the Virginia Christian Alliance.
Photo Credit: Julia Rendleman

Beyond the Lowe's loading dock, where co-workers have taken to calling him "Mr. President," Deng has his share of believers. They span the U.S. political spectrum despite the country's deeply polarized immigration politics.

Those on the right tout Deng - a Christian kidnapped as a young boy by the mujahideen and forced into slavery - as validation of President Donald Trump's "Muslim ban" and other hard-line stances on immigration. To the left, he's proof that refugees can flourish and offer hope to their homelands if only America would welcome them.

Deng's campaign operates out of Blake's offices at the Virginia Christian Alliance, which leads battles against abortion and gay rights in the state Capitol. Hundreds of African American Baptists, gathered at a Richmond convention in June, gave Deng a standing ovation, comparing him sympathetically to children fleeing Central America today.

"If it was U.S. politics, he would win every debate because he would simply tell his story," said Shawn Utsey, a Virginia Commonwealth University psychology professor and interim chairman of the school's department of African American studies.

Deng earned a bachelor's degree from VCU and was the first student to sign up for the homeland security major the school created after the Sept. 11, 2001, terrorist attacks. He had hoped to get a job with the FBI or Department of Homeland Security, but his command of written English was too limited.

On a campus with eight or nine Sudanese refugees, Deng stood out because he was always organizing something, Utsey said. Deng put together a program to help local African immigrants improve their English, led efforts to build a school and deliver medicine to South Sudan, and staged a two-day conference on Sudan that drew diplomats and scholars from Washington and elsewhere. 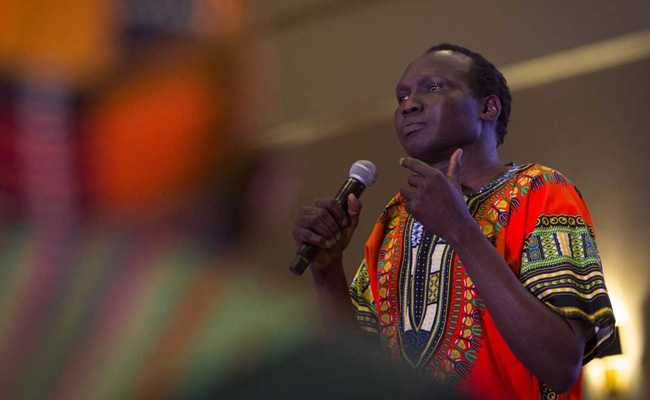 Bol Gai Deng addresses the Baptist General Convention on June 27, 2018 in Richmond, Virginia. Deng is a "Lost Boy" who was enslaved around the age of 7 and is now campaigning to return to South Sudan as the democratically elected president.
Photo Credit: Julia Rendleman

"Of all the Lost Boys, I've not heard any of them saying, 'I'm going back to make a difference,' " Utsey said. "He came here, achieved some success, and the whole time he did that, he was worried about his people in South Sudan and how he would improve their lives."

While Deng is well known among Richmond's South Sudanese community, it's not clear that he has a broad following across the diaspora. His campaign Facebook page has 3,600 likes. His name did not ring a bell with a few prominent South Sudanese expats reached outside the United States, including Peter Biar Ajak, a Lost Boy who is now a World Bank economist working toward his doctorate in Cambridge, England, and Brian Adeba in Canada.

"I bet as soon as a peace deal is finalized, people will come out of the woodwork [to run]," said Adeba, a deputy director at the Enough Project, which seeks to end genocide and crimes against humanity.

Whatever his political prospects, Deng has been given time and attention from government experts in the United States. He has met several times with William Leighty, former chief of staff to Democratic Virginia governors Mark Warner and Tim Kaine, who has trained government leaders in countries as different as Scotland and Nigeria.

Some of Leighty's advice to Deng was universal, such as the need to build a cabinet that "reflects all people, not just the people who support you," Leighty said. And some of it was specific to Deng's country - spun off from Sudan proper in 2011 and soon mired in a civil war that has led to the deaths of tens of thousands of people - which lacks the most basic infrastructure for governing or modern life, such as a functioning financial system.

The east-central African nation, which started out with a population of 12 million, has 2.5 million citizens living in camps in neighboring countries, 2 million internally displaced and 7 million in need of humanitarian assistance, according to State Department figures.

Deng was about 7 years old when raiders from Sudan's Muslim north swept into his Dinka village in the south, killing men, raping women and kidnapping him and hundreds of other boys and girls. Enslaved for years, he managed to escape while tending cattle by hopping on a passing train. He made his way to refugee camps in Khartoum and Cairo. In 1999, when he was about 17, he reached suburban Richmond, where a church had offered to resettle him and three fellow Sudanese teens.

It's hard to square that horrific past with the sunny, 6-foot-4 string bean who strides through Lowe's like a small-town mayor in a Fourth of July parade. He has friends all over the store, from fellow unloaders in back to customer service reps out front.

Members of the unloading crew take turns going inside the truck, rolling the contents down a conveyor belt for the others to sort and move to store shelves. It gets terribly hot in the truck in summer. When Deng's not inside, he's always checking on the guy who is, said Kim Gray, 27, one of three men helping Deng empty a truck one weeknight last month.

"He cares for people a lot," Gray said. "He has a kind heart, very kind heart."

Deng's life now is a mind-boggling leap from the village of his youth, which had no electricity or running water, much less lawns and patio sets.

His home was a grass hut with a dirt floor and a loft for sleeping, in case lions crept in at night. His family grew wheat and okra, raised dairy cows and hunted game in the bush with spears.

He was one of "about 13" children. (It's regarded as a "curse" to count them, he said.) His parents died of injuries sustained in raids, but several sisters and at least one brother are alive in South Sudan and elsewhere. (He is vague about their whereabouts out of fear for their security.)

Deng alone made it to the United States, where even today he eats just one meal a day, as he did as a child. Initially housed in a Henrico County apartment with the three other refugees, he knew little English and struggled at first.

"He bought a car from one of these people who charged him 29 percent interest when he was working a minimum-wage job," said Jill Wood, the woman Deng regards as his "American mom." She calls him by the Christian name he was given at birth, William.

Wood's husband, Frank, had persuaded fellow members of St. Bartholomew's Episcopal Church to sponsor the refugees. Empty-nester professionals with a four-bedroom house, the Woods eventually invited Deng to live with them. That was in 2001. He is still there.

The couple helped him get through VCU. They also learned that their liberal politics did not match those of their houseguest, who came home one day with a Bush-Cheney bumper sticker on his car.

"I have only yelled at him one time, and that was about Trump," Jill Wood said.

Political differences aside, Deng became a beloved member of the family. The couple's grandchildren call him "Uncle William." Frank suffered a fall, a stroke and another fall in the years before he died, and it was Deng who slept by his side - Frank on a hospital bed in the living room, Deng on a mattress on the floor.

Wood learned that Deng was running for president in church, when their priest announced that he'd come to him, seeking the congregation's blessing. "First I've heard of it," she told fellow choir members.

"William, I'm just going to tell you one thing: You cannot run for president of South Sudan until you clean up your room," she told him later.

More daunting obstacles stand in his way. Like the fact that Kiir shows no desire to give up power. That the country is racked by civil war and lacks even the most basic tools for running an election. Many experts agree that the first step is to replace the current government - one Adeba calls a "violent kleptocracy" - and establish an interim one that is willing and able to host fair elections.

Deng sees a clear path forward from his perch on the living room BarcaLounger, the legs of his khakis inching up just enough to reveal scars from the chains he wore in slavery. He thinks Trump could get the ball rolling by nudging Kiir out, perhaps paving the way for a President Deng.