Several road tunnels were flooded and rail services were completely suspended in and around the German city of Stuttgart, according to police and rail operator Deutsche Bahn. 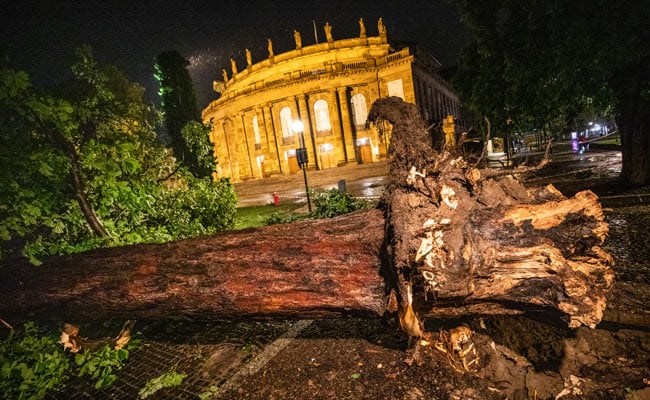 An uprooted tree lays in front of the Opera House in Stuttgart, southern Germany, on June 28, 2021.

Heavy rain, giant hailstones and gale-force winds lashed parts of southern Germany and Switzerland on Monday night, causing widespread flooding and tearing off part of the roof of an opera house.

Several road tunnels were flooded and rail services were completely suspended in and around the German city of Stuttgart, according to police and rail operator Deutsche Bahn.

Emergency services across the southern states of Rheinland-Palatinate and Baden-Wuerttemberg reported hundreds of calls to the emergency services to deal with flooded cellars, fallen trees, landslides and stranded drivers.

At around 8:30 pm, a heavy gust of wind tore off part of the roof of the Stuttgart Opera while around 250 people were still inside following a song recital.

No one was injured but staff were still assessing the potential damage caused by several thousand litres of rainwater entering the house, he said.

In Nottwill, in the Swiss canton of Lucerne, the Swiss news agency ATS reported giant hailstones up to seven centimetres wide.

In the canton of Fribourg, the police and fire brigade were called 300 times, including to rescue a class of 16 children and two adults caught in the hail.

Six of the children and one adult were taken to hospital.

At least five people were injured in the German-speaking cantons, including a cyclist who suffered head injuries from hailstones, according to ATS.