Brussels On High Alert After Explosions At Airport, Metro Station 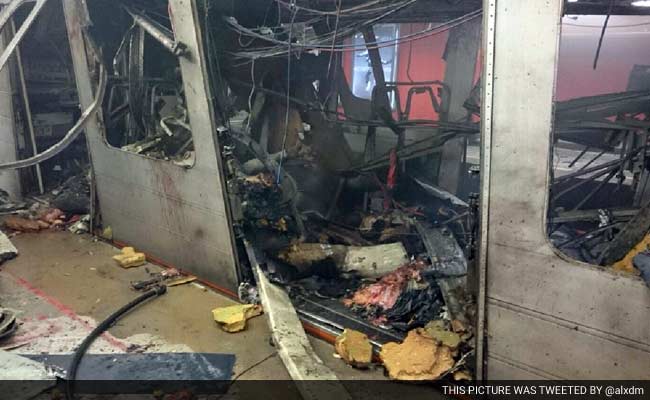 The Belgian prosecutor's office described the airport and metro station blasts as part of a suicide attack.

Brussels: More than a dozen people were killed and many others injured after apparently coordinated explosions rocked Brussels' airport and a metro station Tuesday, raising fears that attackers carried out retaliatory strikes after the arrest of a key suspect in last year's Paris massacre.

The Belgian prosecutor's office described the airport blasts as part of a suicide attack.

The Belgian capital was out put on maximum terror alert and all of public transport throughout the city shut down. At the Zaventem Airport, the blasts collapsed ceilings in the departure hall and left pools of blood amid splintered signs and abandoned luggage.

Belgian media reported that at least 13 people were killed in the explosions at the airport and the subway station. Those casualty figures could not immediately be confirmed, but some media reports placed the tally higher - suggesting the full count was still unclear hours after the 8 a.m. bloodshed.

At least one of the airport explosions took place in the departure hall near the American Airlines check-in counter.

Amateur video taken immediately after the airport attack showed streams of panicked passengers running out of the airport shortly after the explosions occurred. Large clouds of smoke bellowed from the blown-out windows of a terminal building.

The airport was closed, as well as the major roadway leading to the airport. Flights were diverted to Liege airport, radio reports said.

The bombing comes just four days after the arrest of Salah Abdeslam, the last known participant in the November attacks on Paris. Abdeslam, 26, was arrested in Brussels' Molenbeek neighborhood.

About 75 minutes after the explosion at the airport, another explosion ripped through the Maelbeek metro station, Belgian media reported. That station, near the heart of the European Union, serves a busy stretch of EU office buildings, embassies and international organizations. The explosion happened toward the end of the morning rush hour, when many subway trains are still packed with commuters.

The entire Brussels metro system was then closed.

"We are following the situation minute by minute," Belgian Prime Minister Charles Michel wrote on Twitter, shortly before the reports of the additional explosion in the metro. "The absolute priority goes to the victims and to people present at the airport."

Damage to the airport has been extensive, news reports said. Eyewitnesses reported a massive amount of broken glass in the departure hall.

Brussels airport tweeted news of the explosions, beseeching people to stay away.

One person, who was in a taxi pulling up to the departures terminal, said she felt and heard two explosions in short succession, "one further away, one closer."

"We saw a few people injured, we saw the glass front of the building had exploded, glass flying around," said Daniela Schwarzer, the head of the Berlin office of the German Marshall Fund of the United States, who was leaving Brussels after a weekend conference there.

The bombing comes just four days after the arrest of Salah Abdeslam, the last known participant in the November attacks on Paris. Abdeslam, 26, was arrested in Brussels' Molenbeek neighborhood.

Security concerns from the explosions immediately rippled across Europe. French President Francois Hollande convened a meeting of his top security advisers in Paris, just days after he joined in celebration with Belgian leaders about the capture of Abdeslam.